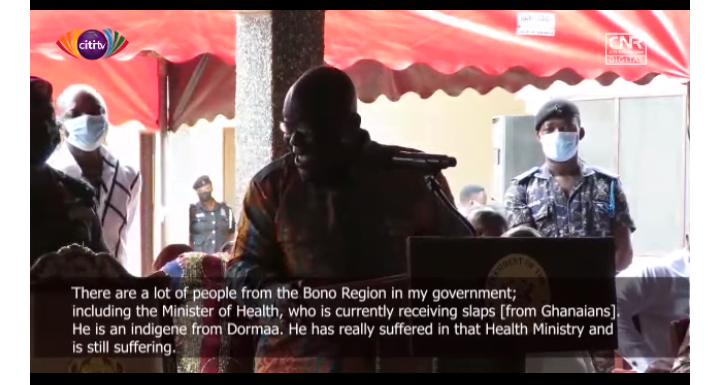 President Nana Addo Dankwa Akufo-Addo, says the Health Minister, Kwaku Agyeman-Manu, has endured a lot of suffering at the Ministry.

Speaking amidst laughter, the President however acknowledged the Minister is one of the illustrious sons from the Bono Region who has served well in his administration.

Although the President did not specifically comment about the controversial Sputnik V Vaccine procurement deal, it appears his comment was in reference to that, considering that the Minister has taken a two-week leave from work amidst pressure on him to resign over the botched vaccine procurement deal.

The government appointee has received widespread condemnation after he publicly admitted breaching procurement processes while seeking to secure Sputnik V vaccines to inoculate Ghanaians against the Coronavirus disease (COVID-19) which had affected thousands of Ghanaians and killed over 800 people.

Speaking in the Bono Region on Tuesday, August 10, 2021, during his two-day tour of the region, President Akufo-Addo said, “There are a lot of people from the Bono Region in my government; including the Minister of Health Agyeman-Manu, who is currently receiving slaps [from Ghanaians]. He is an indigene from Dormaa. He has really suffered in that Health Ministry and is still suffering,” he said of the appointee while laughing together with dignitaries and others gathered at the venue.

He signed the agreement without parliamentary or cabinet approvals. He also did not seek approval from the Public Procurement Authority (PPA).

It also emerged that Ghana paid more than US$2.8 million to Sheikh Al Maktoum, an intermediary, for the procurement of the Sputnik V vaccine contrary to claims by the Minister that no money was paid for the products.

A report put together by a parliamentary committee tasked to probe the deal recommended that the money should be retrieved.

The Minority in Parliament last week called on President Nana Addo Dankwa Akufo-Addo to immediately dismiss the Minister of Health Mr Agyeman-Manu saying he is not fit to be in office.

They argue that he violated the 1992 constitution and his oath of office by trying to procure vaccines through middlemen without recourse to Parliament or cabinet.

“It is beyond any reasonable doubt the minister betrayed his oath of office and for that matter, and he also failed to uphold the constitution and the laws of our country.”

“I must say that the Minister should be sanctioned. He must be removed by the president. He is not fit to occupy the office of a minister of state and must therefore be removed from office henceforth, failing which this House must pass a vote of censure on the minister,” said Minority Chief Whip, Muntaka Mubarak.

Related Topics:Agyeman-ManufeaturedSputnik v
Up Next