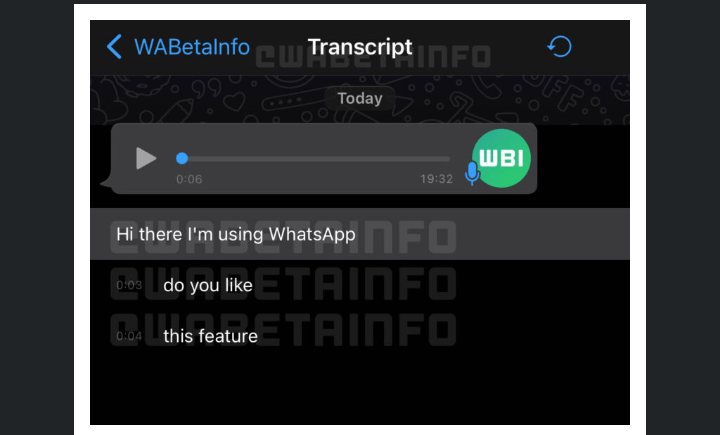 Instant messaging app WhatsApp is working on a feature that will be able to automatically convert voice notes to text. And text to voice notes.

According to wabetainfo, the WhatsApp voice note transcription [ convert voice notes into text  ]  feature is under development for iPhone users and it will be included in future updates for beta testers.

This feature will be very helpful in a situation where the user of the feature is not ready to listen to a long-winded voice note from a family member or friend due to the location or atmosphere and want to take a quick read-through of the message the sender has sent.

Converting the audio/voice to text will definitely require the context of the audio to be analysed and the immediate assumption of many peoples that the voice notes will be sent to Facebook servers for transcription.

However, the information from wabetainfo clarifies that that will not be the case. And Apple’s own speech recognition service will handle the course for iPhone users.

iPhone users will have to permit WhatsApp to access this service and agree ot their speech data being sent to apple, which may be used to improve its speech recognition technology.

The image below shows the prompt users would receive when choosing to transcribe a voice note. 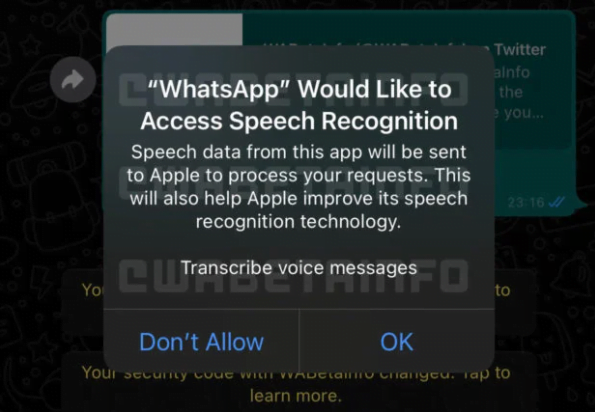 After a successful transcription is done, the converted text is stored locally and shown in a message underneath the voice note.

WABetaInfo said it is unclear if there is any plan of deploying the feature WhatsApp on android. However, given that WhatsApp hardly implements features on one platform which it doesn’t eventually bring to the other, it is very likely that the feature will be hitting Android users very soon.

What remains to be known is which speech recognition service it will rely on with Android devices, with one possible candidate being google’s speech-to-text API

Note; WhatsApp voice note transcription is already to some users through third-party apps, but that is scary as to whether your private convo is squarely saved or not. This can also expose your identity and other details of yours to malware and hackers.