Globecalls.com
Home Entertainment And News List Of Artists And Their Reaction To Kidi’s Sack 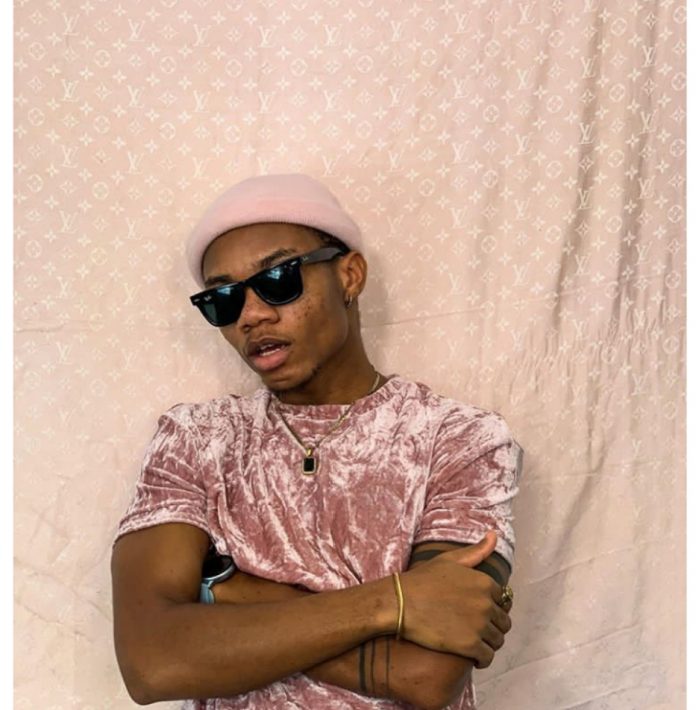 Some celebrities have taken to social media to react to the way a presenter called out Kidi for being late to an interview.

According to the presenter, the ‘ Say Cheese‘ hitmaker arrived 25 minutes after 11 am – the scheduled time for the interview.

Although KiDi apologised to the host and listeners, Nana Romeo said time was far spent, and hence would not do the interview.

The host’s actions has generated a discussion among Ghanaians with some holding an opinion that KiDi could have been reprimanded off-air. Others were however of the view that the action by the presenter was necessary and in the right direction.

But it seems it’s not only music lovers and fans of KiDi who are bothered about the incident which has been trending on Twitter.

For movie producer Peter Sedufia, while the incident may be an unfortunate one it is also an opportunity for both guests and hosts to treat each other with respect

According to him, radio stations have also faulted when it comes to starting interviews or shows.

He stated instances where up and coming artistes have arrived on time for various interviews only for it to be canceled.

“We’re all in this together to create a thriving industry. Let’s respect appointment times and treat each other with maximum respect.”

This KiDi incident is an unfortunate one. But, I think it's high time both the media stations and their guests treated each other with deserved respect. Mostly, when I have interviews and I'm running late for some reason, I'm on my phone, constantly updating the producer on my ETA. But, there are times the media station gives guests a strict time to report; say 3:45pm prompt, and that, the show starts at exactly 4:00pm. The guest reports at the said time agreed and ends up waiting for over 30 minutes after the 4pm before called into the studio. Should the guests have left your studio, or, should they have come on your show to lambast your unprofessionalism? There's no form of apology whatsoever to that guest when they finally get on the show. The presenter just Kickstarts the show as if nothing happened. It's even worse if you're an up and coming. You can wait till the show is almost done and someone would come and tell you that they're sorry they can't have your interview today because the programme was packed, so they'll reschedule you for another day. They'll not tell you the truth that they had a celebrity in the studio and got carried away by the conversation and lost track of your presence. We're all in this together to create a thriving industry. Let's respect appointment times and treat each other with maximum respect.

But for Comedian Clemento Suarez, it is unfortunate that after the artiste apologised to the host, he was still walked out of the studio without the interview being granted.

That was very disappointing and I don’t think even your fellow presenters are happy about what you did.

“Sometimes some of us get impromptu calls for shows and we try our best to meet the appointment. We don’t come on air to complain.”

“Your guest is late and its left with 35mins, 35 minutes paaaaaa and you can’t interview KiDi, KiDi oo please, please. Na performance for shows koraaa will KiDi perform for 35mins?? We deserve an apology. That was not fair at all.”

Standing for Kidi.. you can call me Katawer3 but what the presenter did was very unfair. We are raising stars and we dont need to disrespect them. The superstar was late,he admitted, apologised but still you just wanted to show the "ego thing" of " )y3 kidi enti de3n" . That was very disappointing and I dont think even your fellow presenters are happy about what you did. Sometimes some of us get impromptu calls for shows and we try our best to meet the appointment. We dont come on air to complain. Your guest is late and its left with 35mins, 35 minutes paaaaaa and you cant interview Kidi, Kidi oo please please. Na performance for shows koraaa will Kidi perform for 35mins?? We deserve an apology. That was not fair at all. If you dont apologise and make things right, some of us will take it that Sark, shatta, Stonebwoy and other big guys will never be late for your show and that 20mins late for your interview means interview cancelled. Thank you I love you @kidimusic , we love you "Wo k)to s3 aboa bi butu wo nua so a,kas3 s)re y3 so ,m'3nkas3 s)re ne so…….."

For musician, EL, regardless of the history between KiDi and the host, a more private approach should have been taken to address the issue.

Rapper Cj Biggerman admits KiDi is at fault but just like EL he holds the opinion that confrontation by the host could have been done off-air. He also praised KiDi for not reacting when the host was speaking. 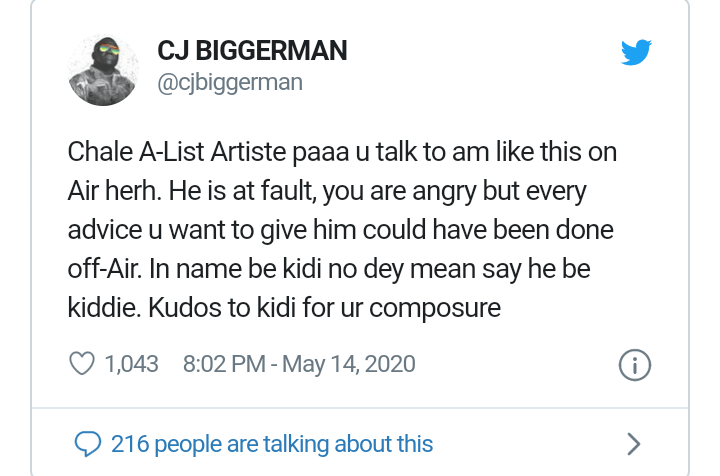 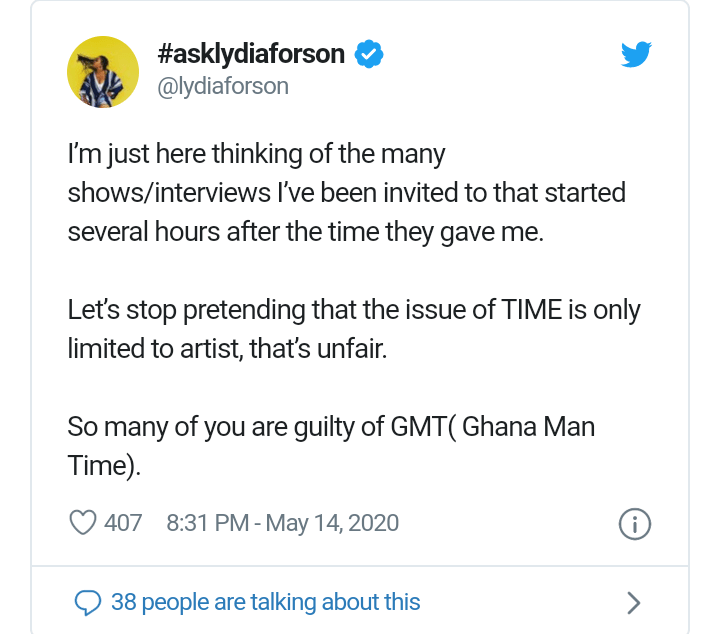 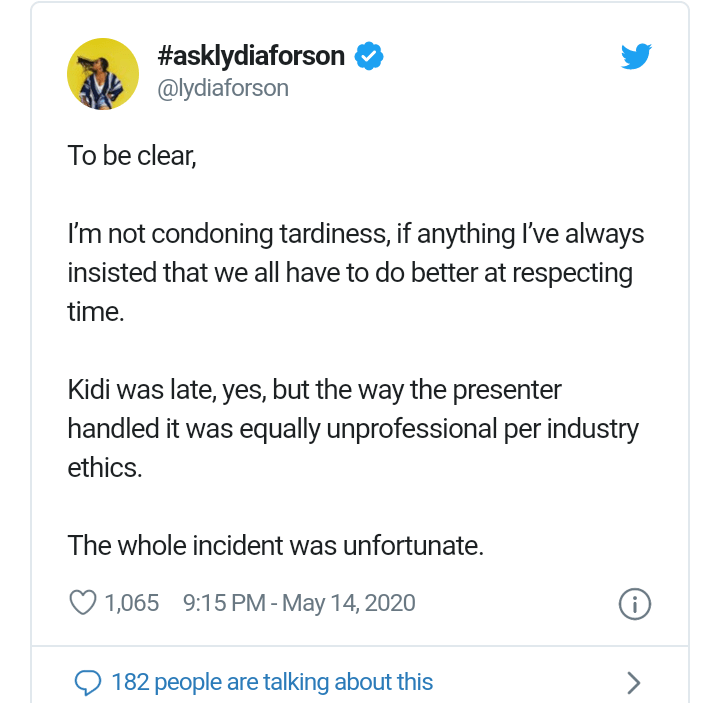 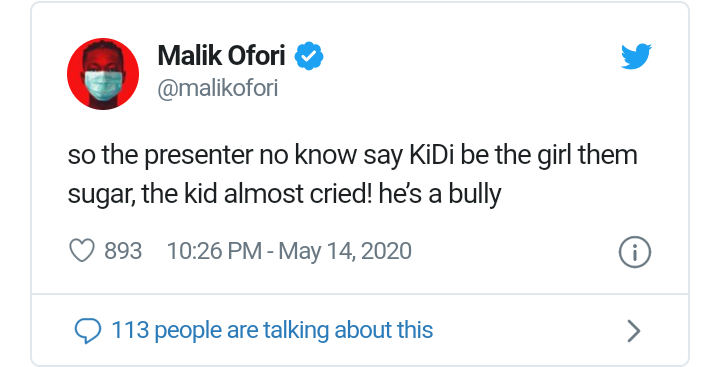