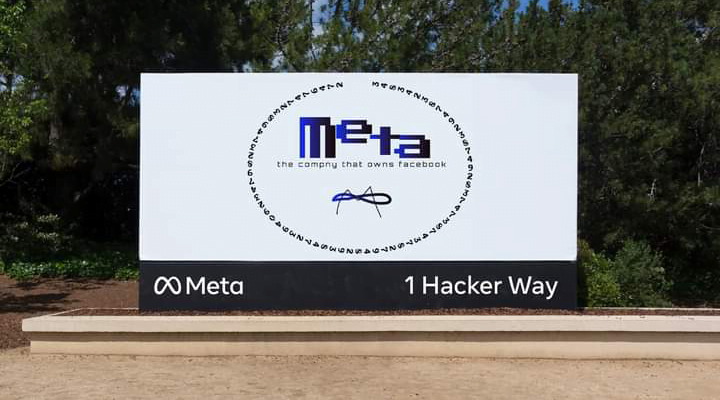 The company that owns Facebook, Instagram, and WhatsApp is now called Meta, ostensibly to signal a pivot towards augmented and virtual reality.

The artist formerly known as Facebook has been banging on about the ‘metaverse’ for a while now, a term that seems to describe a utopia/dystopia in which all our external interactions are informed by some kind of digital overlay that will somehow improve reality. The most acute among you may already be forming a suspicion about which company will provide, manage and monetize this platform.

“I’m proud of what we’ve built so far, and excited about what comes next – as we move beyond what’s possible today, beyond the constraints of screens, beyond the limits of distance and physics -and towards a future where everyone can be present with each other, create new opportunities, and experience new things,” said Facebook founder and Meta boss Mark Zuckerberg.

“With all the scrutiny and public debate, some of you might be wondering why we’re doing this right now. The answer is that I believe that we’re put on this earth to create. I believe that technology can make our lives better. And I believe the future won’t be built on its own.”

Announcing @Meta — the Facebook company’s new name. Meta is helping to build the metaverse, a place where we’ll play and connect in 3D. Welcome to the next chapter of social connection. pic.twitter.com/ywSJPLsCoD

Zuck is, of course, referring to all the aggro Facebook (which is what everyone is still going to call his company) is having to put up with thanks its superstar ‘whistleblower’. But of far great consequence to everyone except those who seek to influence its censorship policies in their favor is the company’s recent outage, which paralyzed everyone who depends on its services. Surely that alone is reason enough to hesitate before immersing yourself even further into the proposed metaverse.

It is to Facebook’s credit that it hasn’t allowed external events to influence its core strategic direction, especially since this vision will only add fuel to the moral panic around the company.

In fact, it could be argued that the timing of this corporate rebrand is perfect since the Facebook brand is tarnished for several reasons. Whether it will help, however, remains far from certain judging by much of the social media reaction.

Meta accomplishes only one thing. It allows Mark Zuckerberg to say he’s not the CEO of Facebook.

He will now do less controversial things like building a new virtual universe where he can be king.

“There is not a single person in existence who has scanned Facebook’s News Feed and said: ‘Yes, immerse me in this reality. I want to feel my uncle’s meme about Hot Pockets on my face.’” https://t.co/dXukghYcLg

The metaverse enables rioters to take a shit in the Capitol from the comfort of their homes.

meta: referring to itself or to the conventions of its genre; self-referential.

So what is the ultimate point of it all and what is Facebook’s vision for the metaverse? The excellent tech commentator Ben Thompson was granted an audience with the man who would be meta-king, on which he based his subsequent analysis. Thompson acknowledged the superficial comparison to Google renaming its holding company Alphabet (which has also failed to stick), but thinks we’re looking at an attempt at corporate transformation more akin to Microsoft’s and Apple’s journeys.

The metaverse vision seems to be all about digital ubiquity. “We believe the metaverse will be the successor to the mobile internet,” said Zuckerberg. “We’ll be able to feel present, like we’re right there with people, no matter how far apart we are.” Again, given what Facebook has been instrumental in revealing about ‘people in the digital environment, it’s questionable how desirable that aim is.

“Instead of typing or tapping, you’re going to be able to gesture with your hands, say a few words, or even just make things happen by thinking about them. Your devices won’t be the focal point of your attention. Instead of getting in the way, they’ll give you a sense of presence in the new experiences you’re having and the people who you’re with.”

Facebook is investing billions in all this, centered around its Oculus VR device business, so the commercial reason for this rebrand is clear. While the company has a daunting array of obstacles to overcome for its strategic vision to have a chance of succeeding, at least it’s giving it a go. The core Facebook platform has an aging user base so it does seem reasonable to view this move as equivalent to Microsoft’s pivot to the cloud or Apple’s reinvention as a mobile device company.

We’ll leave you with a bunch of videos starting with Zuck’s pitch and then detailing some Oculus launches that were announced at the same time as the rebrand.