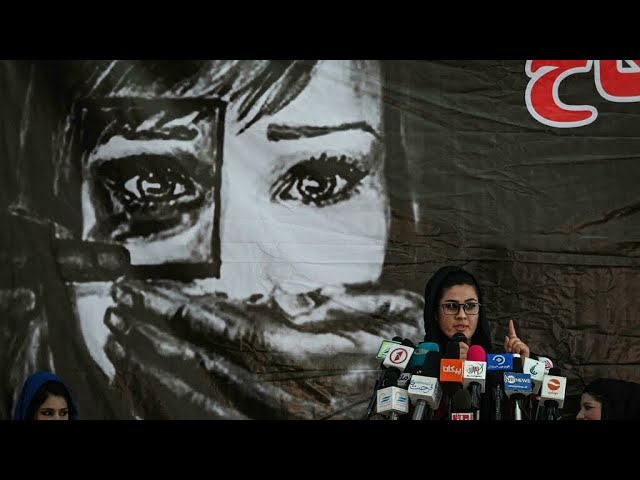 The Taliban’s rapid-fire advance has left women in Afghanistan and girls, a whole generation of whom have grown up with rights and freedoms, among the most vulnerable. Now they stand to lose those hard-won gains as the Taliban seize control of Kabul.

As the Taliban complete their dramatic sweep through Afghanistan, pouring into the capital they were driven out of two decades ago, women in Afghanistan and girls are among the most vulnerable.

Afghan women have been targeted for speaking out against attacks by the Taliban or simply for holding positions of authority.

Since the start of 2021 civilian deaths have risen by almost 50 percent, with more women and children killed and wounded in Afghanistan than in the first six months of any year since records began in 2009, the UN reported in July.

The Afghan government has blamed most targeted killings on the Taliban, who deny carrying out assassinations.

As the Islamist insurgents enter the capital, many fear a disintegration of women’s rights, with the Taliban overturning the freedoms gained during the 20 years since US-led forces helped oversee the country’s transition to democracy.

“The Taliban will regress freedom at all levels and that is what we are fighting against,” an Afghan government spokesperson told Reuters on August 13.

“Women and children are suffering the most and our forces are trying to save democracy. The world should understand and help us.”

As the capital city falls into the hands of Islamist insurgents, those pleas for help may be too late. Numerous reports have emerged of the Taliban going door-to-door, drafting lists of women and girls aged between 12 and 45 years who are then forced to marry Islamist fighters. Women are being told they cannot leave home without a male escort, can no longer work or study or freely choose the clothes they want to wear. Schools, too, are being closed.

For a whole generation of Afghan women who entered public life – the lawmakers, journalists, local governors, doctors, nurses, teachers, and public administrators – there’s much to lose. While they strove, working alongside male colleagues and in communities unused to seeing women in positions of authority, to help build a democratically-run civil society, they also hoped to open up opportunities for later generations of women to succeed them.

Zahra, 26, is among the many young women who fear their education and ambitions will come to nothing. She watched Thursday evening as the Taliban flooded her hometown of Herat, Afghanistan’s third-largest city, and hoisted their white flags emblazoned with an Islamic declaration of faith.

“I am in big shock,” Zahra, who works for a non-profit organization to raise awareness for women, told AP. “How can it be possible for me as a woman who has worked so hard and tried to learn and advance, to now have to hide and stay at home?”

Zahra stopped going to the office a month ago, as the Taliban neared, and began working remotely from home. But since Thursday she has been unable to work.

Many other educated Afghan women have taken to social media to appeal for help and express their frustration. 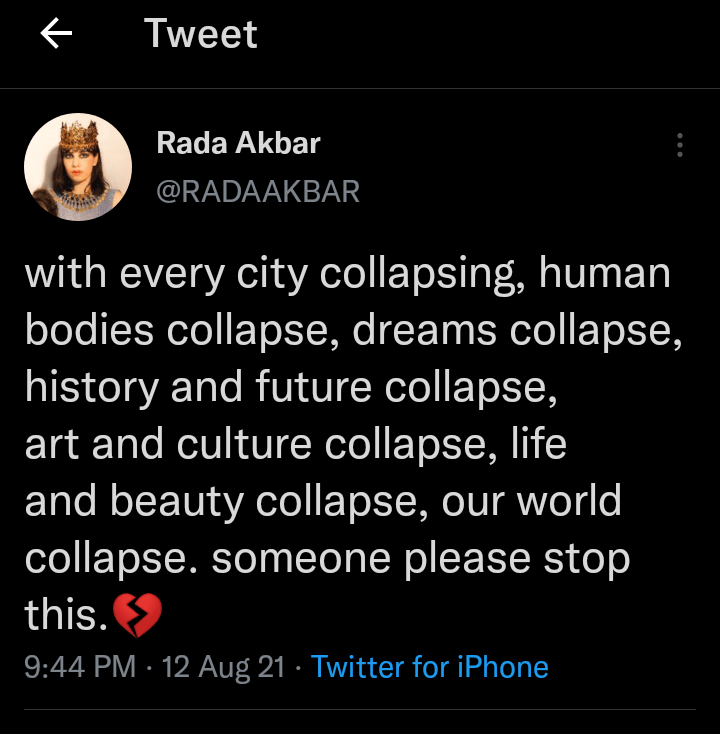 Farkhunda Zahra Naderi, a former lawmaker and senior UN advisor to Afghan President Ashraf Ghani and now a member of Afghanistan’s High Council for National Reconciliation has watched as her country opened up over the 20 years to become part of the global community.

“My greatest fear is now they are marginalizing women who have been working in these leadership positions, who have been a strong voice against the most powerful abusers but also working with them to change the situation on the ground,” she said in an interview with Bloomberg. If they eliminate these leaders, she asks, who will be left to speak up for women and defend the gains made over the last 20 years? 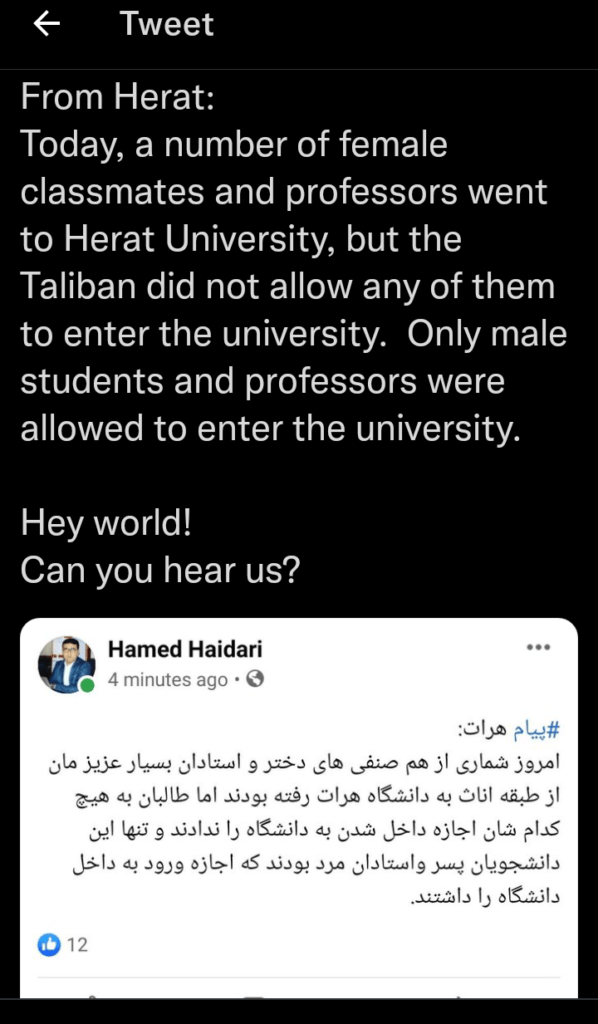 Taliban leaders repeatedly made assurances in talks with Western and other leaders, which ultimately failed this month in Doha, that women would continue to have equal rights by Islamic law, including the ability to work and be educated. But in cities overrun by Taliban insurgents, women are already losing their jobs to men.

Women employees at two bank branches, one in Kandahar and the other in the city of Herat, were harassed and castigated by Taliban gunmen in July. The gunmen escorted the women to their homes and told them not to return to their jobs, which would go to male relatives instead.

“It’s really strange to not be allowed to get to work, but now this is what it is,” Noor Khatera, a 43-year-old woman who had worked in the accounts department of the bank told Reuters.

“I taught myself English and even learned how to operate a computer, but now I will have to look for a place where I can just work with more women around.”

When the fundamentalist group ruled Afghanistan from 1996 to 2001 they imposed Sharia law, a strict interpretation of Islamic law which meant women could not work, girls were banned from attending school and women had to cover their faces in public and always be accompanied by a male relative if they wanted to leave their homes.

Women who broke the rules sometimes suffered humiliation and public beatings by the Taliban’s religious police. The Taliban also carried out public executions, chopped off the hands of thieves, and stoned women accused of adultery.

So far there have been no reports of such extreme measures in the areas the Taliban have captured. But the many recently reported incidents of the Taliban’s treatment of women and girls to suggest they intend to revert to governing as they once had.

Victoria Fontan, vice president of the American University of Afghanistan told FRANCE 24 that the situation for Afghan women and girls is very bleak, especially those who are students.

Professor Fontan said some of her female students were holed up in the cities of Kandahar and Herat, which were seized by the Taliban.

“Life is very difficult for them,” she said. “Are they going to be able to continue studying online or not? Telecommunications is going to be quite a key strategy for the Taliban and so for [the students] their only lifeline is the internet, so they’re extremely worried they’re going to be confined to their houses and no longer able to study.”

Marianne O’Grady, deputy country director for Care International in Kabul, is more optimistic. She believes the achievements of women over the past two decades will be difficult to erase, even if the Taliban succeed in their takeover.

“You can’t uneducate millions of people,” she told AP. If women “are back behind walls and not able to go out as much, at least they can now educate their cousins and their neighbors and their children in ways that couldn’t happen 25 years ago”.

Many women, though, are choosing to flee. Nearly 250,000 Afghans have fled their homes since the end of May, 80 percent of them women and children, according to the UN refugee agency.

Ghani on Saturday broke days of silence to address his fellow citizens, saying his main responsibility now was to prevent any more destruction and instability.

But Ghani’s message will ring hollow for Afghan women who are already witnessing reprisals and a reversal of freedoms they once enjoyed.

In the days of Taliban rule, Zarmina Kakar, a 26-year-old women’s rights activist from Kabul, remembered a time when her mother took her out to buy ice cream and was whipped by a Taliban fighter for momentarily exposing her face.

“Today again, I feel that if the Taliban come to power, we will return to the same dark days,” she told AP.

Who Are The Taliban In Afghanistan?

Advertisement
Related Topics:afghanistanfeaturedTaliban
Up Next

Who Are The Taliban In Afghanistan?