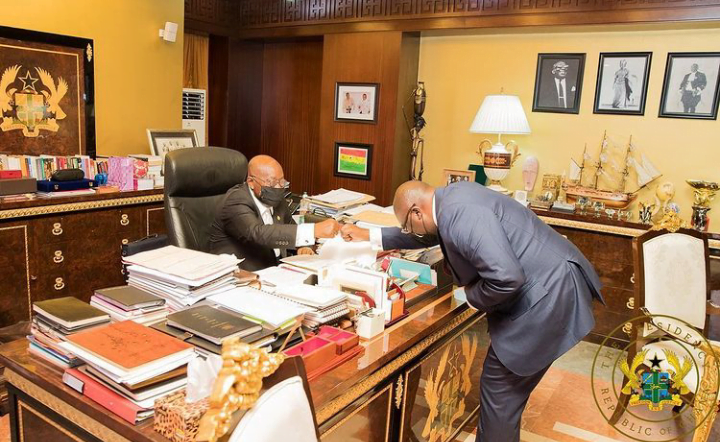 President Akufo-Addo and Vice President Dr. Mahamudu Bawumia are celebrating the 2020 election win once again after the Supreme Court ruled the election petition in their favor.

This, according to the apex court, is because the case before it has no merit thus it will not order a re-run of the election as the petitioner sought.

In a video posted by the Director of Communications at the Presidency, President Akufo-Addo and Vice President Bawumia were seated in the former’s office keenly paying attention to the court proceedings.

Dr. Bawumia after hearing the judgment stood to clap and fist bump the president. He congratulated President Akufo-Addo once again on his win.

The President who was also pleased with the ruling congratulated his Vice.

The two statemen shared a laugh and continued to watch the happenings in the court.

Former President John Mahama who lost the 2020 polls took the Electoral Commission to court, challenging the validity of results and the declaration of President Akufo-Addo as the winner.

But reading the ruling of the court today, Chief Justice Anin Yeboah said the petitioner did not satisfy all the 5 issues outlined by the court to determine the case.

‘You And Who Freed Our Nation’? – Bridget Otoo Fires Akuffo, twitter Came For Her.