“Ah! ah! The Olori of a man want to die abi? He should not near my daughter o.” The church mummy shouted over the phone looking at her husband who was also listening to their conversation because the phone was on loud speaker when Kehinde called to inform her of the latest development.

“I think Sade needs to leave that village. I don’t see any reasonable thing she is doing there and she has her degree…” The Pastor told his wife with a lowered voice looking concerned and she gave him a supportive look before speaking further with Kehinde.
“But brother Kehinde, what’s your opinion, I mean what do you suggest we do now?” She asked in order to know his own plans.
“Mummy, I don’t really know… But I don’t think that village is still a safe place for sister Sade, she needs to come out and find something reasonable to do with her life…” He said, counting his words carefully to avoid being misunderstood.

“But, is there any arrangements for where she would stay?” The church mummy cunningly asked smiling silently as her husband looked up at her with a ‘what are you saying?’ expression on his face, because there are empty, unoccupied rooms in the personage and Sade can comfortably stay in one of them with her daughter. She waved at her husband to calm down.

“Daddy, I want to know whether he has other plans.” She whispered into her husband’s ear, removing the phone faraway from her mouth and the Pastor smiled at her criminal sense of reasoning.

“No arrangements yet. I just said I should inform you about the latest development, and know what next to be done in order to enhance Sade’s safety…” He said calmly sensing that the woman was trying to get words out of his mouth.

“Okay, let me discuss with daddy first and I will get back to you.” She said and dropped the call.
“Why are you looking at me that way?” She asked her husband and started laughing.
“I wonder why you are not an inspector in the police force. What were you trying to hear from my son’s mouth?” He said jokingly.
“Ah! Anything o. I don’t want to take chances again o. Do I know whether he wants to accommodate her in his house?” She said maintaining a serious face then started laughing again.

“No, no, that Kehinde you see is a disciplined young man. He won’t even think it.” The Pastor defended him and his wife eyed him in a funny way.
“Ah! I don’t understand how you suddenly became very fond of brother Kehinde o, that young man just won your heart without any struggles…” She teased her husband.
“Yes o, I love disciplined young men and I have studied him carefully and found him worthy of my trust. That’s by the way, can you now go ahead and call Sade let’s hear from her?” He asked rhetorically, then continued.

“And please stop looking at me that way. You haven’t been doing your bed ministry lately, I won’t interrupt you from saving Sade’s soul o, but when you are through with her, come over to the bed and save mine too.. ” The Pastor said, lying back on the bed and looking into his wife’s eyes in a funny way.

“Pas…tor!!!” His wife called him and at the same time laughing hard.
“Yes, woman of God!” He replied, then continued.
“Pastor needs to be ministered to, hot ministration o.” He said smiling in a naughty way.
“Ah! Man of God, stop being carnal.” She teased him, still laughing.
“Carnal ke. How can I be carnal when I married a spiritual woman that has the power both to minister to my spirit, soul and body?

It’s a spiritual thing jaree! I have been given the license under the constitution of heaven and you are the only woman of God that can minister to me with holy hands. Do and come over here my dear..” He said laughing and the church mummy fell off the bed laughing hard.

“Hello, sister Sade. How are you?” Kehinde spoke with Sade over the phone after finalizing with the church mummy.
“I’m fine brother Kehinde.” She replied with a calm voice.
“Good afternoon sir.” She greeted almost immediately.
“Yeah, did mummy call you?” He asked almost immediately.
“Yes, she called me in the morning few minutes after I finished speaking with you. He said I should get my things and that of Toyin ready that you are coming to pick us first thing tomorrow morning.” Sade reported.

“Yes, that’s it. I will drive down there very early so I can come back in time and attend to some office calls.” He said and she cut in.
“Brother Kehinde, thank you very much for speaking to mummy on my behalf. What could I have done with out you?” She said and he quickly interrupted her.

“Ah! No o, sister Sade. I didn’t speak with mummy on your behalf, God granted your desire of coming back to the city. Isn’t God faithful?” He asked rhetorically laughing.
“Yes, He is. But I still want to thank you..” She said and he quickly cut her short.
“Sister Sade, leave me jor! ” he said and she joined him laughing.

Kehinde drove down to Sade’s village very early the next morning and arrived before 6:30am when Sade was bathing Toyin. He asked to be shown their luggage which he began to park into the car immediately while Sade and Toyin get themselves prepared for the journey.
“Sade!” Olori’s voice was heard from the backyard when they were about entering the car to leave for the city.
“You can’t run away from your shadow, can you?” He said with a threatening look and everyone turned and found him standing akimbo.

“Yes, even a man’s shadow do leave him.” Kehinde answered on seeing him.
“Stay away from this matter young man, I have no business with you.” Olori fired at him angrily.
“Sade you are my wife and you cannot run away from me to anywhere. You belong to me!” He said and her parents, lowered their head in shame.
“I’m not your wife neither do I belong to you.” Sade blew hot at him.
“Every dime I spent on you and your family espoused you to me.” He said domineeringly.

“You lie! ” Kehinde fired at him, then turned to face Sade,
“Sade enter this car let’s get out of here.” He said, trying hard to control his temper.
“It’s either i marry Sade, or no man will have her.” Olori threatened and Kehinde gave a scornful laugh.
“Sister Sade, I said get into the car.” He urged her and entered the driver’s seat and waited for the crying Sade to join him in the car while Toyin was already at the back seat watching the drama. Sade’s parents sat at a place unable to talk with their head still lowered down to the earth as Olori kept releasing threats.

“You all will pay for this…” He threatened, pointing from Kehinde to Sade’s parents as she entered the car and Kehinde zoomed off immediately…

Olori i beg park well. Pas…tor!!! Which one come be ministration on the bed na? 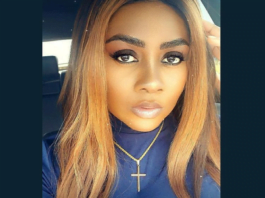 In My House, My Wife Is The Head Of The Family.