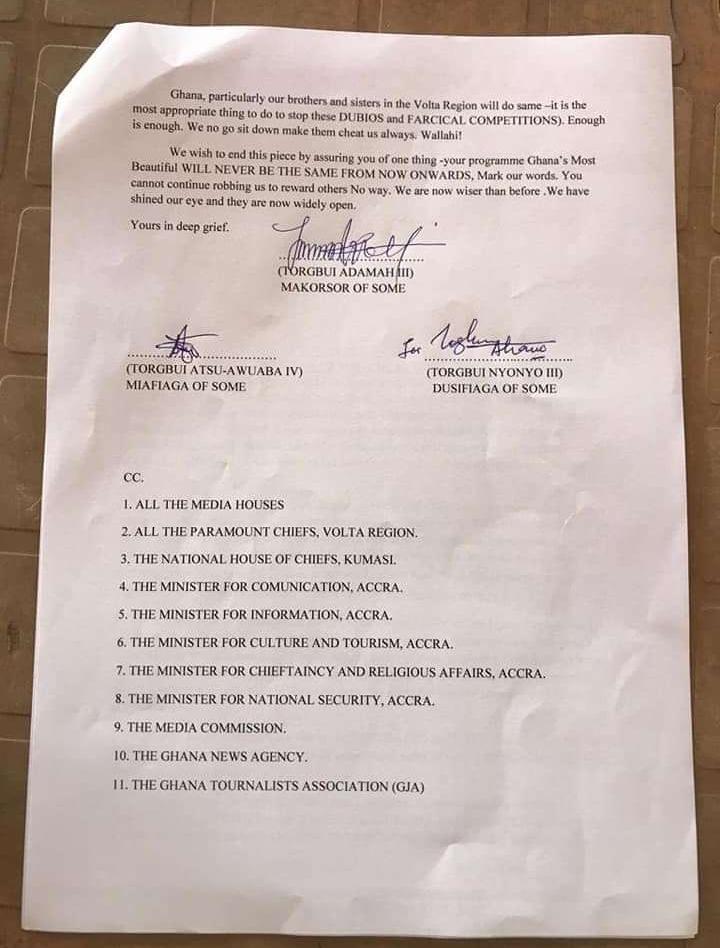 Volta Region has taken what they dim as the necessary steps in protecting the Region from further cheat by withdrawing from future Ghana Most Beautiful contests.

The just ended Ghana Most Beautiful contest saw Ekua from the Ashanti Region as the ultimate winner of the competition. A reward the people of Volta described unclear.

The Volta Region representative Enam as at the time of the declaration, was leading the competition in votes with a gap of 10,000 + away from the closest challenger Ekua of the Ashanti Region.

Linda Ampah’s [ the GMB Judge] declaration was welcomed with a huge displeasure from fans and supporters of Enam of the Volta Region.

In the latest development, a letter believed to be from some concerned chiefs and supporters from Some Traditional Area in the Volta Region expressed the displeasure and tribalism they see in the affairs of the GMB competition. Therefore, edging all ewe ladies to stop participating in the contest.

We, the chiefs and the people of the Some Traditional Area of the Ketu South Municipality of the Volta Region of Ghana, hereby write to express to you [ and for that matter the entire country ] our consternation and disgust at what happened at the just ended Ghana Most Beautiful [ GMB] 2019.

It was obvious that our daughter Enam, the Volta Region representative in the contest was blatantly, shamelessly and maliciously denied the crown which she undoubtedly deserve as a result of her brilliant performances and the massive votes cast for her.

We monitored the contest from the beginning to the end. From the onset we noticed several attempts by you the producers, the judges and the other contestants to frustrate ENAM into giving up, but we urged her on, in the belief that her tenacity of purpose , her relentlessness and our massive voting and texting power would make her win the crown.

We believe in Enam, just as other Ghanaians do , because in the words of our Ewe elders, “Nukporkple nuku la, ame ade ke medene dzorgbe nu o” [ what is obvious to the eyes cannot be denied ]

ENAM had put in everything humanly possible to win the coveted crown and the people of Ghana, knowing her ability to perform wonders , supported her massively with their votes.

Enam put up brilliant outstanding performances from the onset to the end, even at the expense of her health. We also supported her with the voting or texting she came up tops in the voting segment with a very high margin. What on earth has made her lose the crown, the whole world wants to know.

There is no doubt that there was an ORCHESTRATED and WELL-EXECUTED plan to deny ENAM the crown and us, the voters / texters huge sums of money for the benefit of TV3’s favourite in the competition.

We , the Chiefs and the people of the Some Traditional Area have advised ourselves, HENCEFORTH, NO CITIZEN OF SOME WILL OR SHALL NEVER PARTICIPATE IN ANY COMPETITION ORGANISED THE TV3 NETWORK.

READ ALSO: J.Derobie Revealed How He Felt When He Met Stonebwoy.