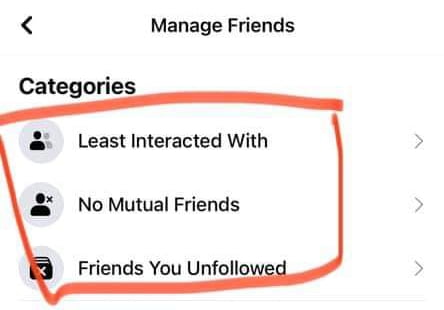 Having dormant or inactive Facebook friends in your list of friends can be very disheartening, especially when you make a post and only 2 – 10 people react when you have more than 4k friends.

At last, you can now remove inactive Facebook friends from your friend list with just a few clicks.

But before that let us look at things that make your Facebook friends dormant or inactive on your post.

In other words, what makes your Facebook friends dormant or inactive. Some of those may be from you. Apart from the fact that the Facebook algorithm allows only a few among your friends to see your post at a time, other causes may be from you.

Recommended: Downloading videos from Facebook and other social media platforms made easier.

Also, at times, Facebook may reduce your reach ( hide it from more users ) to force you into paying for visibility ( Facebook ad ). This mostly happens to pages and groups.

Now, how you contribute towards the inactiveness of Facebook friends is by making unrelated posts.

Unrelated posts are those that your friends are not interested in or don’t connect with your friends. A blogger friend of mine dedicated his Facebook walls to supporting a popular musician hence fans of that musician always react to his post. ( And he always posts about that musician, thus keeping his friend engaged ). Know what will get your friends’ reactions.

The above is just enough to tell you what l mean by unrelated posts. Imagine that friend of mine switched today and started throwing his support behind a different musician, the reactions, engagement, and reach on his posts will drop in the meantime.

The second point is accepting or friending the wrong circle of friends on the app.

Let us use my blogger friend again as an example. Imagine he has more friends of a different musician than his favorite. They may always see his posts but never engage or react.

So if your reason for creating a Facebook account is to promote your music, add more friends who are into music, art production, etc.

Another point is making noninteractive posts. A post that doesn’t require your friends to take any action on your post. ( I hope this point is self-explanatory enough )

Also, you can tag some friends on your post to trigger reactions and comments. One thing is if they can pretend not to have seen your post, but they can’t pretend on notifications because we all check Facebook notifications. That is how you know what is going on around your account and everything you are involved in on the app.

Now if after every effort, your huge friend list gives you only 2 – 10 likes, no comment, and no share, it is time to blow some of them away. Perhaps some have lost their passwords, some are dead, or accounts deactivated.

We all know to delete or unfriend on Facebook but this is about deleting or unfriending the less interactive and nonactive ones.

There are tools and add ons that many claimed to have used but l haven’t tested any of those to recommend for you so, I am going to show you pictorially how to remove inactive friends from your Facebook friends list. Follow the directives in the pictures and note, this feature is still on test by Facebook so if your app and device ( phone ) is not updated, update and try. If it still fails, then you have to wait until it is fully rolled out.