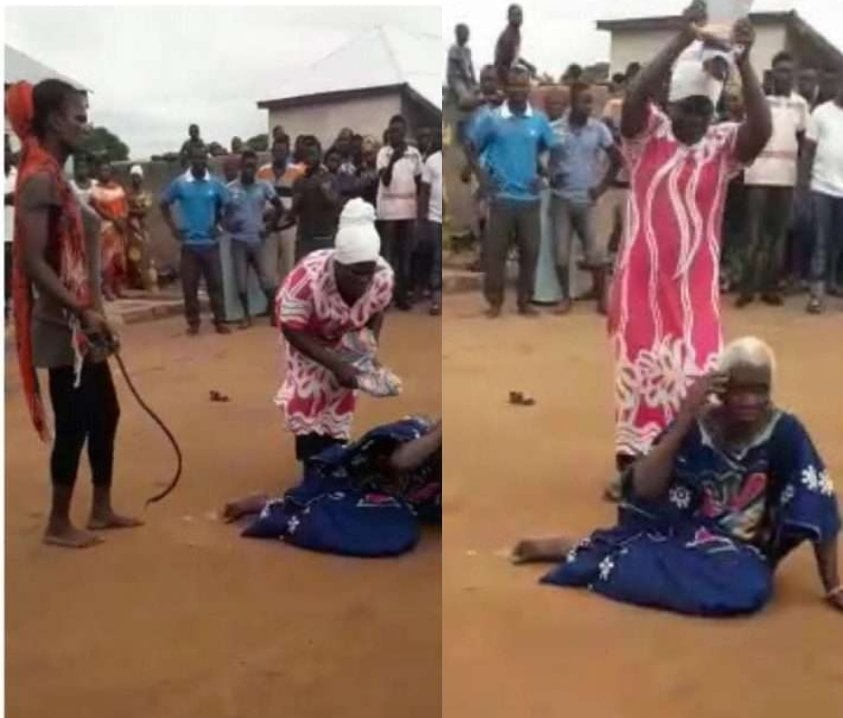 After calls from sympathizers and authorities to bring killers of Akua Denteh to book, her son finally speak about the heartbreaking incidence refuting claims that mom is a witch.

90 Years old Akua Denteh was brutalized publicly after allegations from a soothsayer that she is a witch in Kafaba village of Gonja Municipality of Savannah Region.

Salami Acquah, son of Mariama Akua Denteh, a 90-year-old woman lynched to death, has denied emphatically that his now-deceased mum was a witch.

Mariama Akua Denteh was executed among a crowd of onlookers in Kafaba in the East Gonja Municipality of the Savannah Region after a fetish priestess pronounced her a witch.

Horrid scenes from the incident have attracted criticism from the masses as the President, in a recent address called for justice to be appropriated and the perpetrators brought to book.

The son of the deceased in a recent interview quashed the allegation that his late mother was a witch.

The 58-year-old man who lives in Salaga mentioned that he received a call on Monday, July 20, 2020, that his mother’s room had been invaded by natives who claimed she was a witch.

According to him, these locals had no proof but a book appearing to be either a Bible or Quran with which they adjudged old women in the Kafaba area witches.

Salami explained that he decided against going to get his mummy from her village because he thought that would affirm that she was indeed an enchantress and has regretted his decision.

He added that the locals beat his mother till she became unconscious on Thursday after taking her to their priestess on a number of ocassions before then.

”My mum has 21 grandchildren. I am a 58-year-old man. If she was indeed a witch wouldn’t she have confessed while they beat her? She was lynched till she became unconscious and left to die when two good Samaritans brought her home” he said.

Who Killed Akua Denteh For Being A Witch?