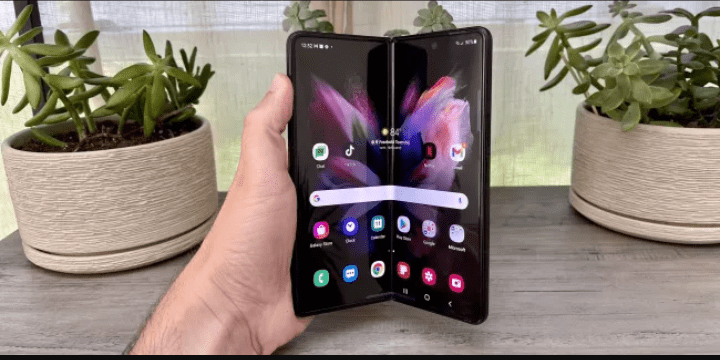 The Samsung Galaxy Z Fold 3 is determined to win over foldable phone skeptics. Worried about the device’s durability? The display is up to 80% tougher, and the whole phone is water-resistant. Want to do more with a massive 7.6-inch screen? There’s S Pen support, plus an under-display camera to make for a more immersive display.

Think foldable phones cost too much? Well, we can’t help you much there. This sequel is still pricey at $1,799, but at least it’s $200 cheaper than its predecessor at launch. If you’re looking for a truly affordable foldable, the new $999 Samsung Galaxy Z Flip 3 is a better bet.

Other notable Galaxy Z Fold 3 upgrades include a brighter display and enhanced multitasking features, complete with a Windows-like taskbar. However, the battery life could be better, the design is still quite bulky, and Samsung shouldn’t have included the S Pen.

While this foldable remains a niche device, our Galaxy Z Fold 3 review shows that Samsung has refined the best foldable phone you can buy, making it an excellent choice for power users who want a phone and tablet in one gadget.

The Galaxy Z Fold 3 is available for pre-order now, with a release date of August 27. Those who pre-order the Galaxy Z Fold 3 can take advantage of a few perks, including getting $200 in Samsung.com credit and 12 months free of Samsung Care+ when you sign up for a three-year plan.

Check out our how-to pre-order the Galaxy Z Fold 3 guide for all the best deals. Check all Amazon reduced prices for pre-order. HERE

How To Check If Someone Block You On WhatsApp

The Galaxy Z Fold 3 adds a lot of in the way of durability, even if it’s still on the bulky side.
Right off the bat, you’ll be glad to know that the new Galaxy Z Fold is IPX8 water-resistant, which means it can withstand being in up to 1.5 meters of water for up to 30 minutes. I doubt most people will dunk this foldable, but it’s good to know it can handle everything from splashes to rain.

Just note that the Z Fold 3 is not dust resistant, so I wouldn’t feel comfy bringing this foldable to the beach.

To further fortify the Galaxy Z Fold 3, its stronger Armor Aluminum body and Gorilla Glass Victus display are designed to resist scratches and drops. Last but not least, Samsung claims that the Z Fold 3 employs a new protective PET film that when combined with “optimized” main screen layers results in an 80% more durable screen. 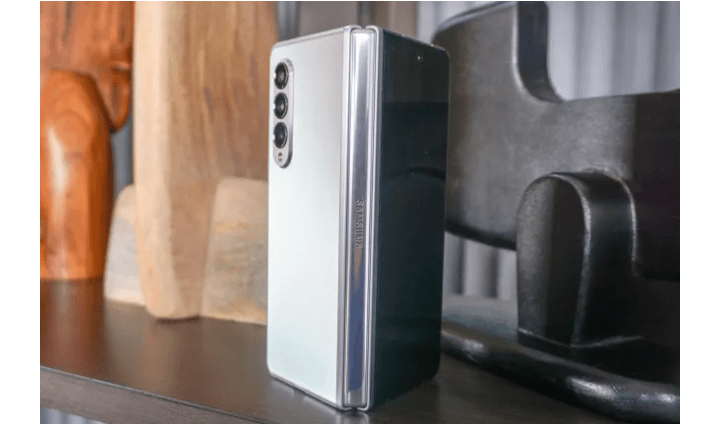 Still, this is way thicker and heavier when closed than most phones, so you’ll feel it in your pocket.

The Galaxy Z Fold 3 comes in three main colours: Phantom Black, Phantom Green and Phantom Silver. I’m a fan of the silver because it pops most.

The Galaxy Z Fold 3 once again features two displays: a 6.2-inch OLED cover display and a 7.6-inch main screen that’s revealed once you unfold the device. 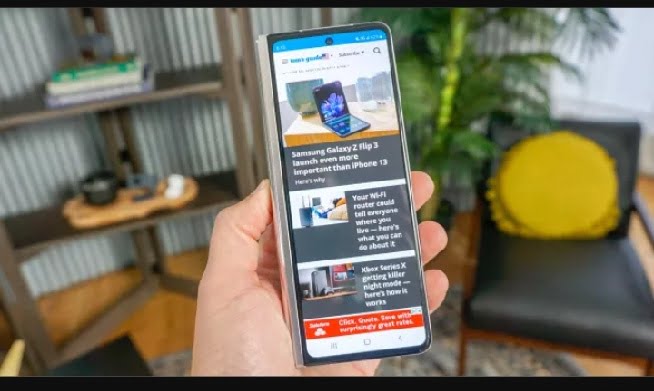 Both panels offer a 120Hz adaptive refresh rate, and I experienced smooth scrolling and overall performance during my hands-on time with the phone.

The resolution for the interior screen is the same as before at 2208 x 1768 pixels, but the good news is that the new display is rated to be 29% brighter than before, thanks to new Eco display technology. 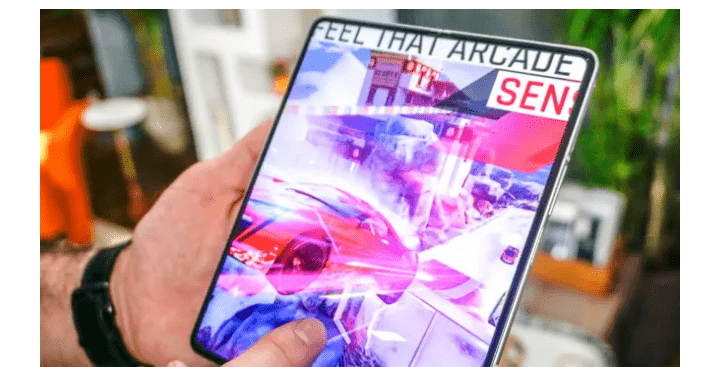 The Galaxy Z Fold 3’s main display looks pretty stunning, and a big reason for that is a new under-display camera. Instead of having to stare at a notch or punch hole, the UDC on the Galaxy Z Fold 3 is nearly invisible, especially when you go full screen on content like photos and videos. When the display is dark, say on the home screen, you can make out the tiny hole, but it’s not that noticeable. 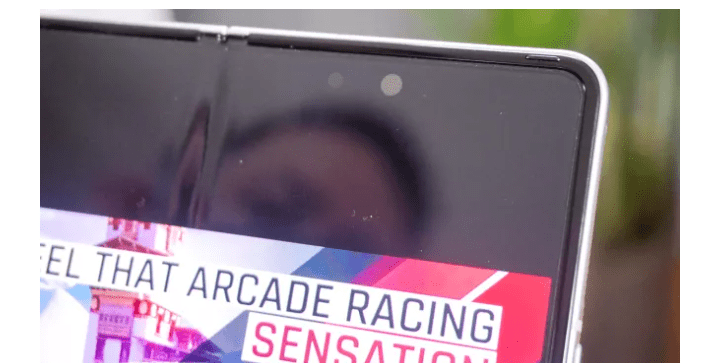 Unfortunately, the Galaxy Z Fold 3’s display averaged 422 nits of brightness in our lab testing. That’s okay but nearly half what the Samsung Galaxy S21 Ultra turned in (821 nits), and the iPhone 12 Pro Max also hit a relatively high 654 nits.

The Galaxy Z Fold 3 Is a multitasking powerhouse. Thanks to the Multi-Active Window feature, you can run two apps side by side (dragging and dropping content between them) or run up to three apps at once. And now the enhanced App Pair feature lets you create shortcuts for two apps later in the same way you had them open. 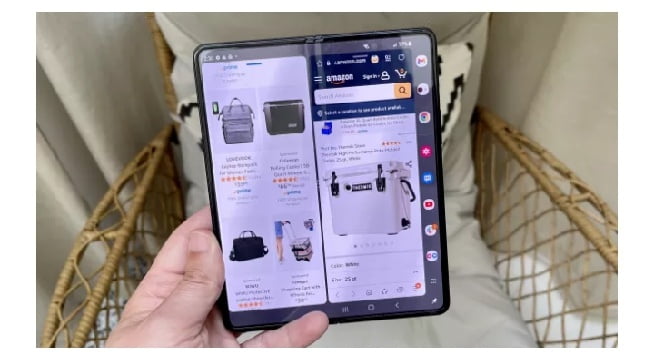 Don’t feel like constantly swiping in from the right side to open the Edge Panel to see these and other apps? Samsung added a new Taskbar feature that lets you switch between apps on the fly; it just sits there on the right side of the display, similar to the Windows taskbar. To get the Taskbar to work, I had to dig into the Settings menu and activate Samsung Labs, which most people won’t know how to do.

Once activated, the Taskbar is a great addition. I love that I can quickly glance at how many notifications I might have in Slack, for example, then quickly switch to that app. Or I can quickly open my favorite App Pair: Gallery and Messages.

Samsung Labs can also force apps that are not optimized for foldable displays to work in Multi-Active Windows mode. For example, I could park Netflix on the left side of the display and continue watching Outer Banks while keeping an eye on messages on the right side of the screen.

Another cool feature is drag and split. For example, if you’re in the Samsung browser and you’re looking at items on Amazon, you can simply drag one over to the right to open a new window. That way you can look at the details on one product while comparing other products on the left. Other apps that support this feature including Samsung Message, MS Office, One Note and more. 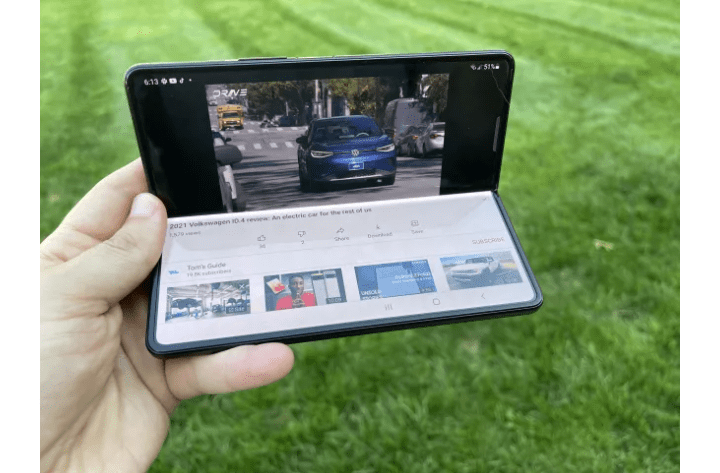 When you fold the Galaxy Z Fold 3 like a laptop, a number of apps support Flex mode, which puts the content up top and controls on the bottom portion of the display. This works in YouTube and the Camera app, and I also used it during a hands-free Google Meet video call. You can even force Flex mode to appear in apps, but I’d rather see more developers just embrace the feature. 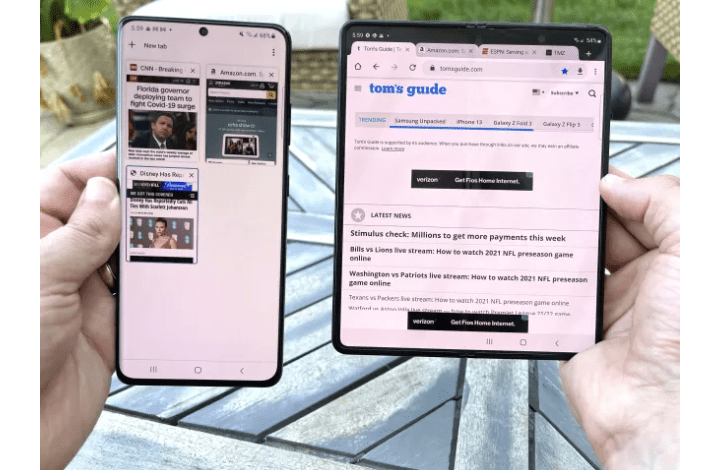 Samsung is also working closely with third-party developers to roll out more apps that work natively with the Galaxy Z Fold 3. These include Snapchat, TikTok, Netflix, Spotify and YouTube. For example, when you’re using Spotify, you’ll see the Now Playing window on the bottom left side and the rest of the discover menu on the right side, making it easier to multitask.

But my favourite optimized app for the Galaxy Z Fold 3 is Chrome. I like being able to see all my tabs at the top and move them around, just as I would on the desktop.

How To Hide Apps On Your IPhone.