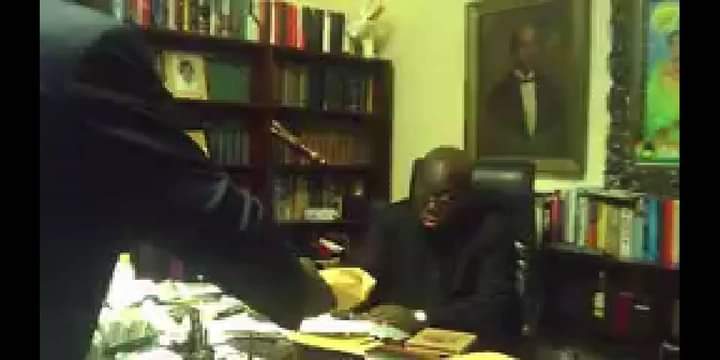 Salis Yakubu Atsuluho, the investigative journalist whose alleged recorded video has birthed the $40,000 bribery scandal has given a detailed account of events leading up to the meeting with Nana Addo Dankwa Akufo-Addo and why he recorded the encounter with the President.

Salis Yakubu disclosed that the meeting with the president was recorded in July 2017 and that he was there as a brother of Alhaji Abass, the Executive Director of the Urban Roads.

He revealed in an interview with Kevin Taylor that the donation to Nana Akufo-Addo by Abass Awolu was made to buy his protection from the President.

Revealing why he recorded the encounter with the president, Salis Yakubu said that in his bid to avoid being fired, Alhaji Abass, who sponsored the NPP campaign in 2016 paid to some intermediaries, with an assurance to get him to the president but they never honoured their promise.

Salis Yakubu said that he took the recording as an insurance policy on the blind side of Alhaji Abass so that in the event the President wanted to fire him, he will use it to blackmail him.

He disclosed that Dr Baffour Adjei Bawuah who eventually managed to get them to the presidency was given GH¢10,000 for his services.

He also mentioned Nana Akufo-Addo, Dr Bawuah, and Fawzia, the wife of Alhaji Abas,s as those who were present when he recorded the video.

He confirmed claims by Sammy Gyamfi and Kennedy Agyapong that the death of Ahmed Suale was on grounds of mistaken identity as he was the one they were after.

He mentioned the name of some government officials and NPP bigwigs who he suspects were behind the murder of Ahmed Suale and talked about attempts on his life.

Salis in the over one-hour interview spoke about his relationship with the NPP, Nana Akufo-Addo and Kennedy Agyapong.

He also mentioned the First Lady as the person used by some contractors to lobby Nana Akufo-Addo to fire Alhaji Abass.