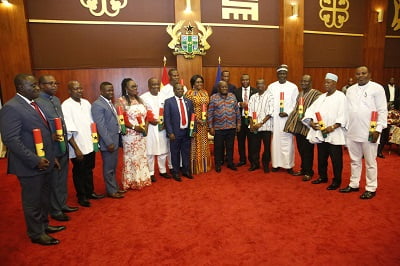 A law lecturer at the Ghana Institute of Management and Public Administration (GIMPA) and a key member of the New Patriotic Party (NPP), Dr. Lawyer Anane Gyinde has hinted that the number of ministries and ministers in the second administration of President Nana Addo Dankwa Akufo Addo will be drastically reduced.

According to the former Kintampo North Parliamentary candidate aspirant of the NPP and member of the Bono East Regional legal and campaign teams of the ruling party, he has picked signals from a reliable source that the president has listened to counsels from experts and the good people of Ghana to cut down the size of his second government.

The signals I’m picking is that the number of Ministers will reduce drastically. You know the president is a listening president and he has listened to the voice of the people. I’m not being emphatic but the signals we are picking is that it (a bloated government) will not repeat “, he said

The accusers, mostly leading members of the NDC, some Civil Society Organizations (CSOs), and some governance experts also criticized the creation of new ministries such as the Ministry of Zongo and Inner City development, Ministry of Monitoring and Evaluation, Ministry of Special Initiative and Ministry of Procurement among others, saying they were unnecessary duplications and a drain on resources of the state.

Dr. Gyinde while admitting that the number of ministries and ministers in Akufo Addo’s former government were indeed too many, quickly added that the situation at the time compelled the president to take that decision.

” A lot of people made propaganda about the president’s appointments but the fact is that he took that decision because of the vision he had at that time which he believed that those appointments were going to help him realize”, Dr. Gyinde added.