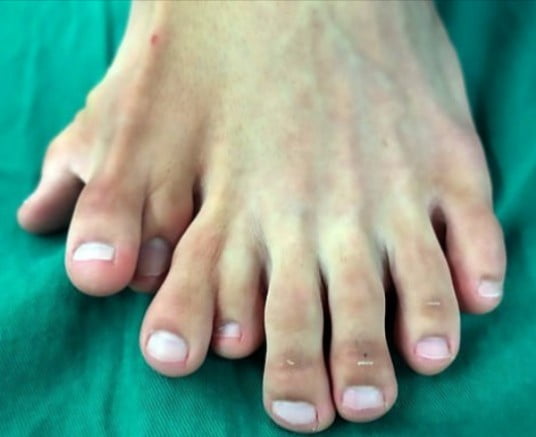 Chinese man, 21, born with nine digits undergo surgery to cut off four of the little toes after his parents refused to do it based on superstitious beliefs.

The man simply named Ajun had to live with the deformity on his left foot for 21 [ twenty one ] years until he had decided to pay for the surgery all by himself, an action against his parents wish.

Tiny digits grew between the main toes in abnormal places, he has no big toe but two tiny toes in v shape.

All his childhood was spent avoiding his peers in order not to be embarrassed.

Talking about his school days, Ajun revealed that he stopped wearing slippers since his third class in primary. He claimed to have never had a girlfriend because he believes he is imperfect and no one will be willing to accept him.

Normally, kids with this deformity undergo surgeries to remove the unwanted toes but Ajun’s parents superstitious Chinese belief prevented him, claiming it’s a blessing from heavens.

He said ” They are so superstitious that they didn’t try to cut it, they said if it look really bad l could just cover it with my shoes.”

But Ajun was willing and ready to cut them off as soon as he reach adulthood. One Chinese Doctor Dr Wu Xiang was shocked as he said “ It is very uncommon to see such a serious deformity untreated on a 21 years old patient “

The Doctor and his team spent 9 hours working on Ajun’s toes, creating one big toe and cutting off the extras. After the operation, Dr Wu Xiang said, “We could have cut off the outermost extra toes , that will be the easiest way out but it will not look perfect. His most natural looking toe is on the outside so we decided to migrate it inwards to its most natural position, replacing the fifth toe and creating a new big toe”

This deformity is call Polydactyly in science.