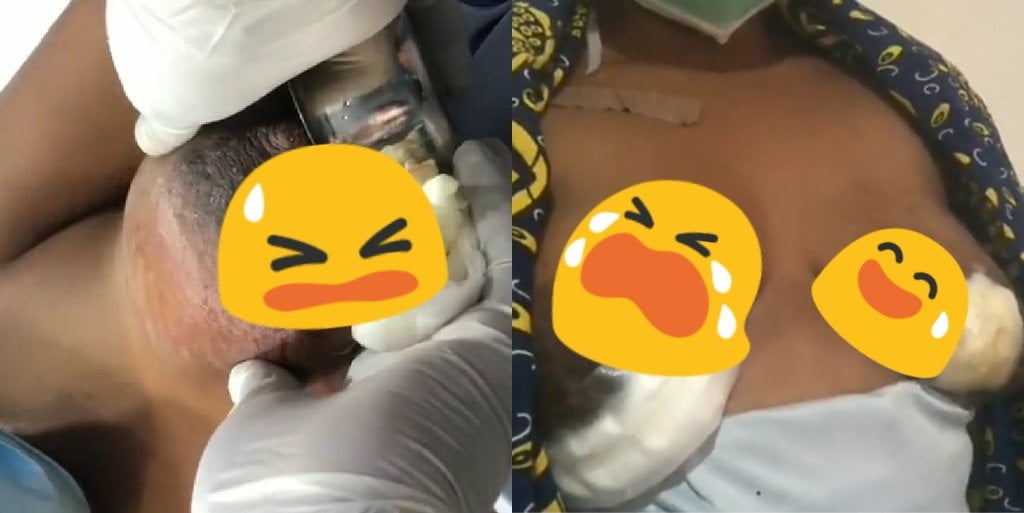 In another episode of plastic surgery gone wrong, a lady has been left in severe pains and a failed result after spending a whopping amount to get her boobs done.

Surprisingly, the plastic surgeon who operated on her is allegedly quack doctor, Anu Med Contour who has been called out many times for taking huge sum of money from ladies to enhance their body parts only to leave them with life threatening results.

About two months after social media influencer, Omohtee revealed how she battles for her life after she underwent a body modification surgery with same Anu Med contour, which went wrong, another lady has now been left with the same fate.

A Twitter user @BROWNIE__XX took to her page to share a video of the graphic aftermath of the lady’s bosoms after she underwent surgery, allegedly with the same Anu Med Contour who according to reports, her clinic had been shut down.

In the video, the injured lady gives the narrative of how after she started having complications following her surgery, she contacted Dr Anu, who kept giving her injections but the complications persisted.

@BROWNIE__XX who shared the video warned ladies to avoid going to Dr Anu for any body enhancement surgery… She wrote,

Please stop going to Doctor Anu Med Contour for any Body Enhancement Surgery or any Surgery at all!! This lady is in so much pain after spending 1,650,000 to get her boobs done! Avoid Med Contour

I'm not surprised that the hate comments are pouring in. For now, the most important thing is to help this doll. For her life to be saved. That is the only reason I have gone all out this time. She has spent all her money. Sold her car!!! Calling for three weeks, no response. The only question I have to the hateful commenters is "would it still be okay it were your family/person/loved one?" #napraswebsite #certifiedandsafe #researchbeforeyougo

Just In: Peter Okoye And His Family Tests Positive Of COVID-19.

Photos: Father Defiles Daughter 3 While His Wife Was In Labour