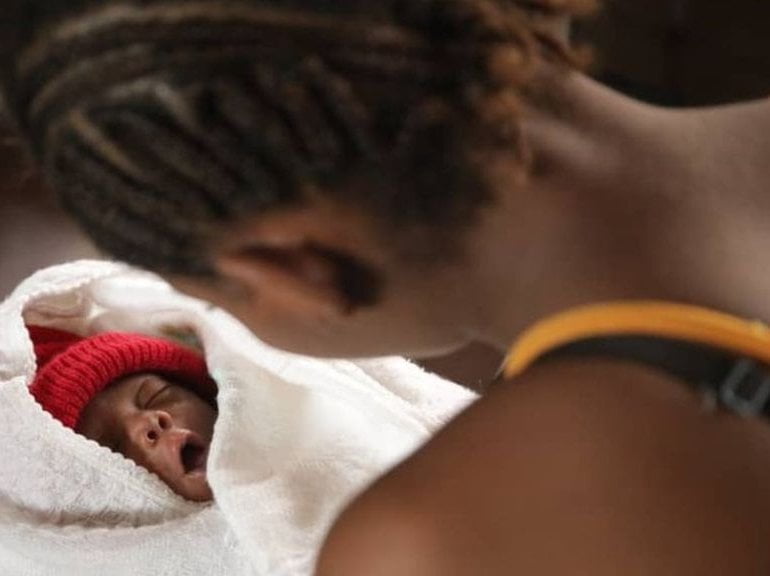 She was traced to her residence in Orlu, Imo State, after the baby, who was being conveyed to his new parents in Lagos, was intercepted by policemen, who were enforcing the lock down directive on April 26, 2020.

Two passengers, who initially identified themselves as a couple: Patrick Mbama, 41,and Ogechi Chinonso Ekwebele, 30, were arrested alongside five other passengers in the Toyota Sienna bus, when they failed to give a reasonable explanation on the baby they were found with.

They, however, revealed during interrogation that the baby was being taken to a childless couple, who were subsequently arrested. The biological mother of the baby, who was paraded, yesterday, at the command headquarters, Ikeja, admitted having sold her baby on her own volition.

Why I Sold My Baby

Asked why, she responded: “I knew I could not take care of the baby because I am not working. I am an orphan. I was forced out of school when I was in Junior Secondary School 2 because there was no money to continue.

“I was impregnated by a trader . But when I informed him, he said I should terminate it, that he was not ready to face such responsibilities. He abandoned me.

“On the day I was going to terminate the pregnancy, the cyclist that conveyed me advised me against such action. He told me he could get someone that would help me cater for the baby.

“After delivery, I gave the baby to this lady (pointing to the lady earlier arrested).

“You will not understand why I took the decision. I could barely feed myself let alone an additional mouth. Besides, my sister, who accommodated me also does not have a job. The baby would have died of hunger if I didn’t do what I did. The money I collected was used to buy medicine and for upkeep.“

On her part, Mrs Cecelia Okafor said she gave N150, 000 to the intermediary for the baby.

Explaining, she said: “I have been barren for 15 years. I paid the amount because I was in dire need of a baby to call my own. I saw this as an opportunity to experience how it feels like being a mother and I also wanted to take care of the baby.”

Commissioner of Police, Lagos State Police Command, CP Hakeem Odumosu, who paraded the suspects alongside others arrested in the state, said the baby had been taken to a home, adding that all suspects would be charged to court.

The Beautiful Transformation Of Korede Francis