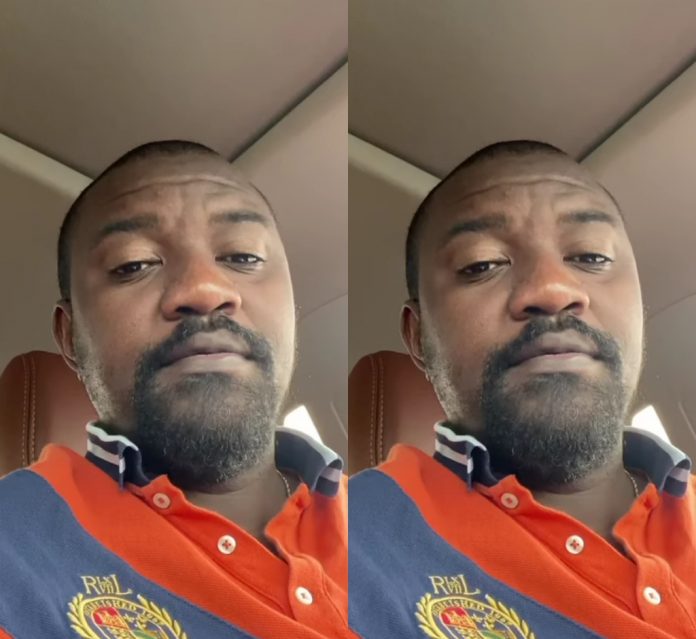 Parliamentary candidate for Ayawaso West Wagon John Dumelo gave an epic reply to a fan who asked if he will be doing his campaign tour with his ‘stolen V8.

John Dumelo and his V8 story is one story with two heads – hard to find the truth as no one is ready to even a him a listening ear for an explanation for that V8 government registered vehicle he used in campaign for John Mahama in 2016. Did he return it after the campaign ot it became his

In a tweet, John Dumelo replied a fan who asked him … are you touring with the stolen V8? the fellow asked. And his reply: …Yes and I just passed in front of the police station.

Yes and I just passed infront of the police station…. https://t.co/TFPLKskspE

In late March 2017 when John Dumelo was accused of driving without approval a government vehicle, a Toyota Land Cruiser with registration GE 8118 –16.

The car he used throughout the 2016 campaign period begging for votes for the then President John Mahama, was found at a workshop in 2017 with men trying to respray the vehicle.

It was at a time when ex-government officials were accused of running away with state vehicles forcing the state to constitute a task-force to hunt for the missing vehicles.

According to Kwame Baffoe, spokesperson of the taskforce set up by the government to retrieve state cars which had gone missing from the garages of the state, they swooped in on the workshop after hearing Dumelo had come to remodel the vehicle.

Checks by the task force showed the vehicle belonged to the National Security but Dumelo insisted he bought the car from Svani Company Limited, a car dealer.

The car in question was later taken over by the task force and sent back into the pool of vehicles owned by the state.

Mr Baffoe later revealed that officers of the Criminal Investigations Department (CID) and the Bureau of National Investigations (BNI), are building a docket on that and at the appropriate time, Dumelo will be arraigned before court.

He mentioned a possible charge of theft of a state property that was likely to be leveled against the actor.

When pressurized further by the task force, he claimed the car was given to him by the former first lady Lordina Mahama.

Further checks with Svani Company indicated the car was among a fleet bought for use by National Security operatives. The company is used by the government to import cars for the state.