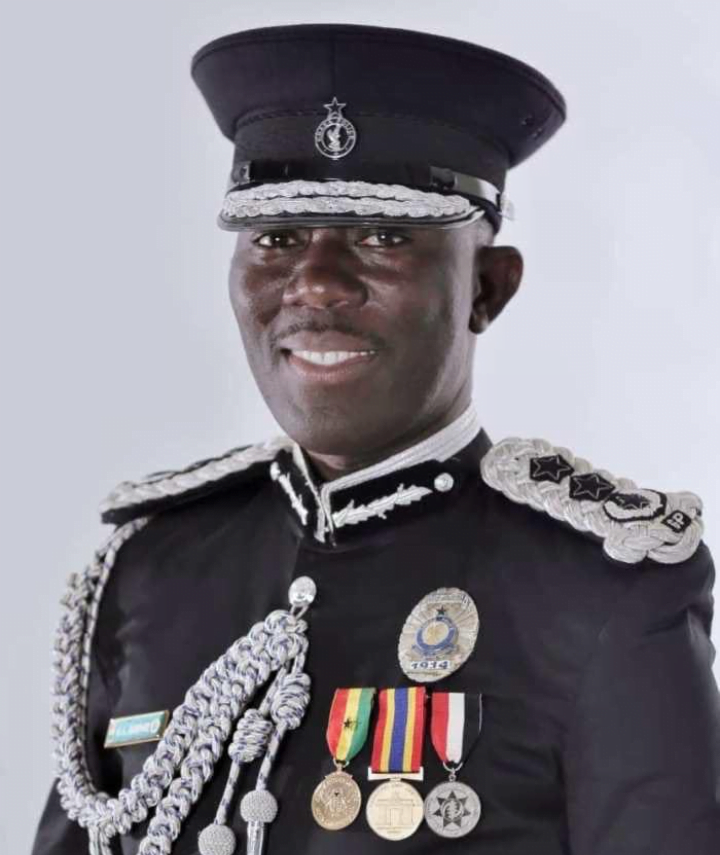 Dr. George Akuffo Dampare is the youngest Acting Inspector–General of Police (IGP) to be appointed in the Fourth Republic, and the eighth youngest since Ghana gained independence.

Prior to this appointment, he was the senior-most police officer after the just retired IGP.

It is not common to find a police officer go through the ranks from a constable to become an IGP.

Dr. Dampare joined the Ghana Police Service (GPS) in December 1990 at age 20, and rose through the ranks to become Commissioner of Police (COP) 24 years later at age 44 in 2014, the rank he held until his appointment.

In 1991, on completion of his recruit training, Dr Dampare, who became a constable, was adjudged the Overall Best Recruit at the National Police Training School and won all awards except the award for the ‘Best Marksman’.

Again in 1996, he emerged the overall Best Cadet for the 32nd Cadet Officers’ Course at the Ghana Police Academy (formerly, Police College), and won all awards, including Excellence in Professional Police Subjects and Excellence in Academic Subjects. 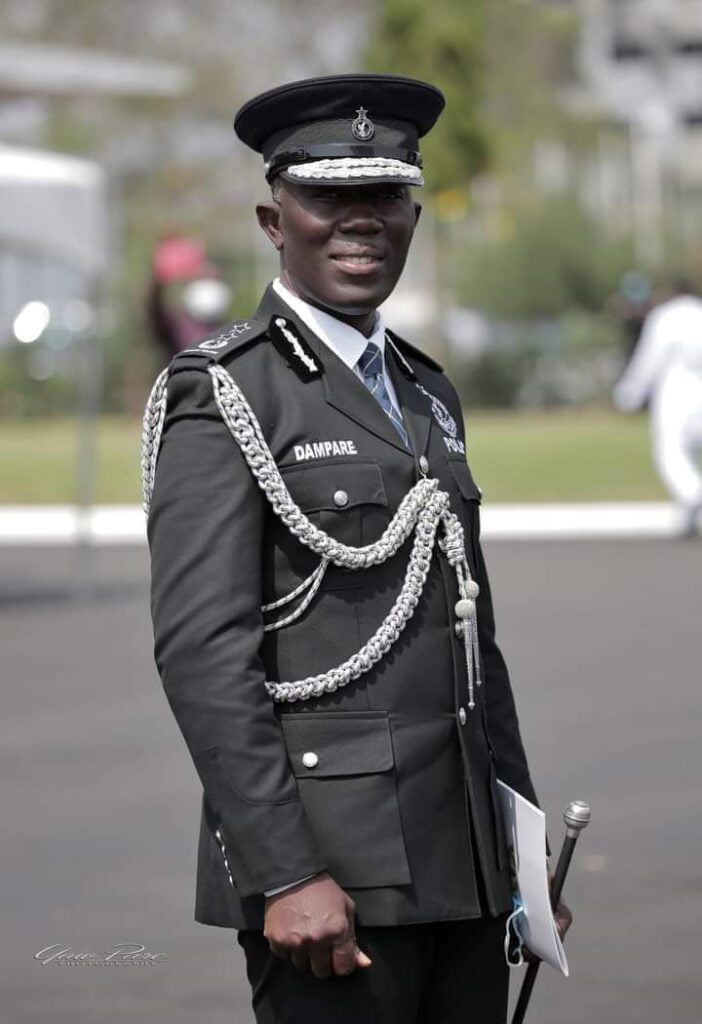 During his over thirty-year career as a police officer, Dr Dampare has made significant contributions to policing in Ghana and beyond, as enumerated below:

Between 2010 and 2015, under the leadership of two IGPs, Messrs. Paul Tawiah Quaye and Mohammed Ahmed Alhassan, Dampare led and coordinated the ‘National Anti-armed Robbery Reward to Informant Initiative’, which saw the arrest and prosecution of many notorious armed robbers across the country.

As the Director-General for National Operations, Dr. Dampare created an efficient system where fragmented units were consolidated to create effective and complete departments, such as the establishment of an Anti-armed Robbery Unit (the COMBAT Unit) to aggressively fight robbery and other violent crimes. He also created the Intelligence Unit within the National Operations Department, which later informed the creation of a Police Intelligence Department at the national level.

As Accra Regional Police Commander, Dampare introduced an innovative and proactive policing strategy called the ‘Continuous Stakeholder EngagementProgramme’, where all stakeholders were included and involved in policing the Region. For the first time, through this initiative, the Ghana Police Service under his leadership, visited political parties in their offices to engage them.

As Director-General in charge of Welfare, Dr. Dampare introduced an innovative social welfare scheme where he led officers from the Department to visit the homes of scores of sick and bedridden police officers across the country, and also introduced strategic medical interventions to facilitate their wellness.

Still, at Welfare, Dampare initiated a process at Dodowa and Kasoa to reclaim lands owned and paid for by police officers. The matter had become a national security threat as many officers were angry at the failure of the leadership of the police administration to intervene in the situation which had lasted for close to a decade.

In 2013, under the leadership of the then Inspector-General of Police (IGP), Mr. Mohammed Ahmed Alhassan, Dr. Dampare led a team of officers, working day and night, to restructure the Armoured Car Squadron (ACS) Unit into the Formed Police Unit (FPU) within a record time of ten (10) weeks. This task had remained impossible for over fifteen years. The FPU has now become one of the police units undertaking internal police operations and international peacekeeping missions under the United Nations and African Union.

As the Director-General of the National Patrol Department (Police Visibility Department) and under the leadership of the then IGP, Mohammed Ahmed Alhassan, Dampare supervised the implementation of the novel ‘Police Visibility’ programme which saw the presence of police personnel at most intersections and communities in Ghana.

Again, during the implementation of the vision of the then IGP,Mohammed Ahmed Alhassan, for the creation of the Police Service Command and Staff College at Winneba and the Police Service Public Safety Training School at Pwalugu, Dr. Dampare was the leader of the technical teams that ensured the full operationalization of these two specialist training institutions.

As Coordinator of the National Inter-Ministerial Task Force for the 2007 Ghana Floods which was under the overall leadership of Dr. Mrs. Mary Chinnery-Hesse (then Chief Advisor to H.E. President J.A. Kufuor), Dr. Dampare led a team, within a seven-month period, to develop and implement a National Disaster Management Model, which brought all United Nations Agencies, Red Cross and Civil Society organizations, among others, together, to successfully manage the disaster.

As Director-General for Finance, Dampare led a Police Technical Implementation Team to work with the Fair Wages and Salaries Commission, to migrate the Police Service onto the Single Spine Salary Structure as the first institution in the country to successfully complete the migration.

Still, as Director-General for Finance, Dampare also introduced the payment of recruits’ allowances through the bank by getting them bank accounts as well as ATM cards. He also engaged the banks and got them to build ATMs at the Police Training Schools at no cost to the government.

Under the visionary instructions of the then IGP, Mr. Paul Tawiah Quaye, Dampare also led a team to establish the Procurement Unit of the GPS and ensure full implementation of the Procurement Act. He introduced cost-saving measures in the repair of Service vehicles and the use of hotel accommodation, among others.

Dampare led a team of officers to use mostly donations from the private sector to give a facelift to the Police Headquarters by constructing a Public Affairs building, the Integrity Square, the Police Fitness and Social Centre, and a Helipad. The CID Headquarters building was also refurbished under his leadership.

As Accra Regional Commander, Dampare raised sufficient capital from the private sector to complete a new office complex and re-roofed 90% of all office buildings at the Regional Headquarters, which had been in a deplorable state for years.
During his policing career, Dr. Dampare has undertaken numerous law enforcement courses at tactical, operational, strategic leadership, and management levels, making him an all-around police officer with the required skills and competencies commensurate with his rank.

Aside from his policing, Dr. Dampare previously worked as a Research Fellow and lecturer at King’s College London, University of London. He also lectured at the University of Cape-Coast (UCC), Ghana Institute of Management and Public Administration (GIMPA), Regent University College, and the DataLink University College. He is also one of the pioneer lecturers at the Business School of the Kwame Nkrumah University of Science and Technology (KNUST), Kumasi.

Having passed the GCE Ordinary and Advanced level examinations as a private candidate in 1989 and 1992 respectively, Dr. Dampare proceeded to study accountancy and became a Chartered Accountant in 1996 at age 25.

Dr. Dampare has also served and continues to serve on several boards including the Economic and Organized Crime Office (EOCO) Governing Board, DataLink University College Council, Police Central Disciplinary Board, and the Pumpkins Foundation Board (a philanthropic organization for underprivileged children, including those with autism).

He is married to Anita and has six children.