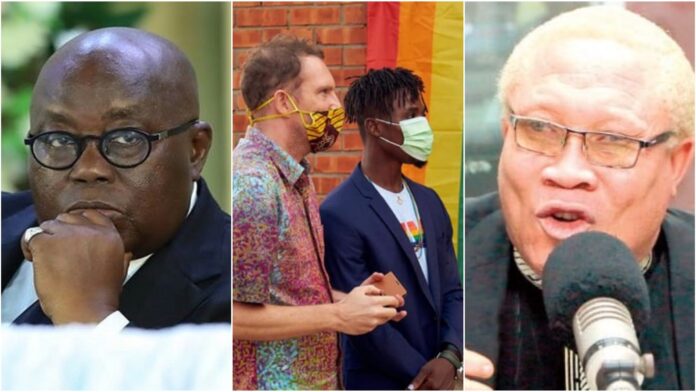 The Executive Secretary of the National Coalition for Proper Human Sexual Rights and Family Values, Moses Foh-Amoaning, has revealed on Joy FM that President Akufo-Addo had ordered for the closure of the LGBTQ office recently opened in Accra.

Speaking on a Christian program on Joy FM, Foh Amoaning stated that Nana Addo already rejects homosexuality in Ghana and that his position was made clear through the minister-designate for Children and social protection, Adwoa Sarfo.

Speaking on TV3, Alex Kofi Donkor lamented the attack on LGBTQ persons, stating that many fear to seek justice let alone report abuses with the police.

“ Many are being attacked for being gay. Because society speaks against it, many are attacking us with impunity. The more reason we must treat these matters as human rights issues,” he stated.

Meanwhile, the newly elected US President, Joe Biden, has rolled out a resettlement visa to aid persons of vulnerable groups, like the LGBTQI facing discrimination in Ghana and Nigeria, to resettle in the USA.

Speaking from the Oval Office as he signed some executive orders, Joe Biden revealed that the Federal Government of the US will take all appropriate steps including increasing Embassy Priority-1 referrals to identify and sharply process the resettlement of highly vulnerable persons including LGBTQI+ who need protection from discrimination and violence.

By this, the US, according to the BBC, “has alerted cases of asylum seekers from LGBTQ communities to give them the need to resettle abroad.”

The Ghana Catholic Bishops Conference has called on President Akufo Addo to declare Ghana’s official stance on homosexuality. The debate over the human rights of the LGBTQI community in Ghana has sparked much controversy as the Diplomatic community call for these rights to be respected.

In a public letter to the president, the Conference of Bishops warned the president of dire consequences should a national standpoint on the matter is not made known.

“We call upon the President of the Republic and Parliament to state unambiguously their position on the matter of homosexuality and its practice in Ghana. We also call on the Government of Ghana to close down the LGBTQI office space that was recently opened in Accra. Finally, we also urge the Executive and the Legislature never to be cowed down or to succumb to the pressure to legalize the rights of LGBTQIA in Ghana,” the letter stated.