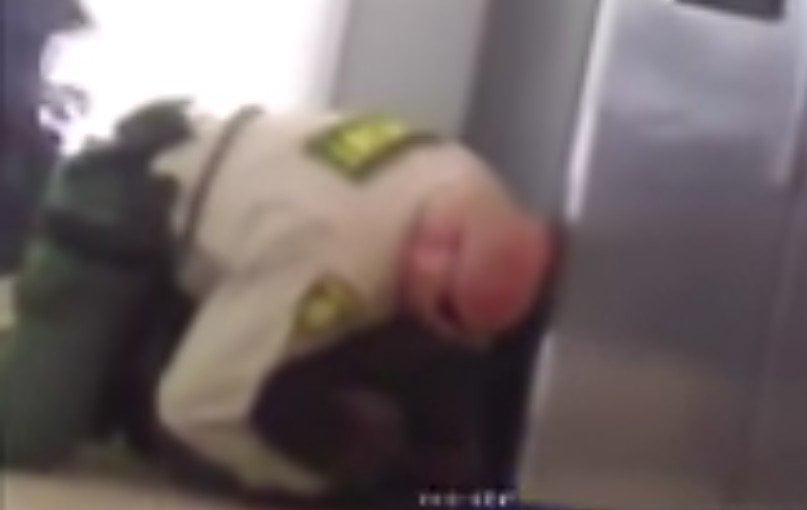 The limbless black teen screams out of pains with his face down on the kitchen floor at Tucson group home with no help from a thick tall police officer with badge and gun.

A teen with no arms or legs obviously can’t fight back in such a situation nor can he be seen as a threat to the officer but a sheriff deputy twice his size and weight is crouching over him and pinning him down in the name of defense.

Pima County Public Defender Joel Feinman told washington posts that the horrifying incident wouldn’t have come to light if not for another teenager who recorded the incident and then received his share of the bully.

” These are children who have already been traumatised in some way” siad Feinman who is fighting for both boys. If a parent reacted to their teenager acting up like how the deputy did, they could be arrested for child abuse. He added.

While most information about other kids is withheld for security reasons, Feinman said; Emmanuel, 15 , who has no legs or arms was abandoned by his family.

On the 26 of September, an adult who works at the group home called the Police Office to report that Emmanuel had run over a trash can and was yelling at the top of voice. Feinman wasn’t sure what got the teenager riled up. To him, that doesn’t matter.

” Fifteen-years-olds who haven’t been through what Emmanuel has been through act out all the time” he stated.

The deputy who responded to the call claimed was Emmanuel disturbing the peace and decided to stop him. Feinman said. That was the point C.J, a 16-year-old who also lives at the group home, started recording the incident from adjoining room.

At the start of the video, a white cop was seen kneeling down and holding the black teenager, Emmanuel in a headlock. Emmanuel was extremely upset as his voice rise to a frantic shriek telling the officer not to hold him that way.