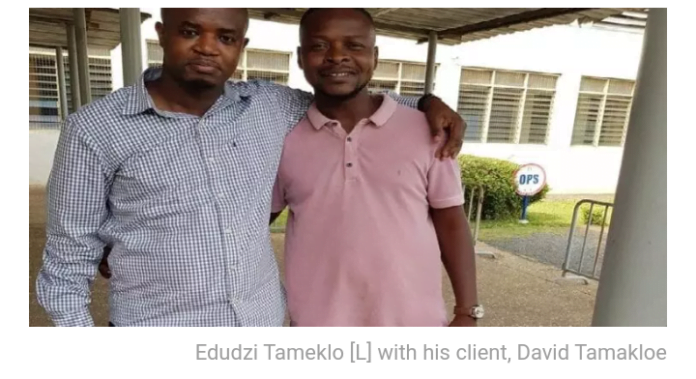 Godwin Edudzi Tamekloe, the lawyer of WhatsUp News editor David Tamakloe, has threatened to spill it all if the police do not withdraw its official statement on the arrest of his client.

The arrest of Mr. Tamakloe on Thursday, April 1 has since generated controversy but the Ghana Police Service on Friday, April 2 stated to clarify the issues.

They claimed the news editor was arrested for “extortion”, among other offenses.

But the lawyer of the arrested news editor says he will have none of that.

He posted on his official Facebook page that the arrest was masterminded by a senior police officer by name of Asomah Hannah.

“Mr. Asoma Hinneh, it is natural to try to protect and defend your wife, your approach in causing the arrest of David and this unprofessional statement from the Police will hurt only your wife,” he wrote.

I have seen a statement from the Ghana Police Service on the arrest of my brother David Sitsope Tamakloe.
I have avoided two interviews from Joyfm and Starrfm on this issue.
Now that the Ghana Police Service decided to put that fabricated narrative out, we will go all out.
Please if you are close to the Senior Police officer who is desirous of helping the wife, Mrs. Eunice Boah Asomah Hinneh, let the Police withdraw that statement before 11 am.

His junior officers took a statement from David Tamakloe on Thursday for the offense of false publication.
On Thursday, there was no issue of blackmail or extortion.
It is an afterthought because I pointed out to the Investigator, Inspector Charles Adjei that he is yet to publish the story.
That he is still speaking to the people involved to ensure fairness.

How do you arrest such a person?
Mr. Senior Police officer, do you know that your wife suggested meeting David? And even suggested Tema?
David in his statement to the police indicated that he has the businesswoman on tape proposing the meeting.
I have subsequently listened to the conversation.
Does Mr. Asoma Hinneh know that the wife indicated to David that the allegations against her are “hearsay.”?
And that she knows her competitors are behind it and that she suspects it?
She had to even apologize to David.

Mr. Asoma Hinneh, it is natural to try to protect and defend your wife, your approach in causing the arrest of David and this unprofessional statement from the Police will hurt only your wife.
I pray this matter gets to court, so you can see how you have decided to mess your wife up with your panic reaction.
Do you know that your wife even expressed her gratitude to David for at least reaching out to her to hear her side of the story before publication?
So how do you arrest such a person?
Do you know that we were almost done with the bail execution before the call came yesterday that they should take an additional statement on the issue of extortion?
So on the bail bond, it is still a false publication on it?
If you know Mr. Asoma Hinneh, tell him to do the needful.
So far, I have calmed my brother not to go on the offensive.
Like the wife stated in the audio, she started her business in the 1970s, that’s why David obliged her invitation.
I am not surprised at the afterthought inclusion of that. He wrote on Facebook. 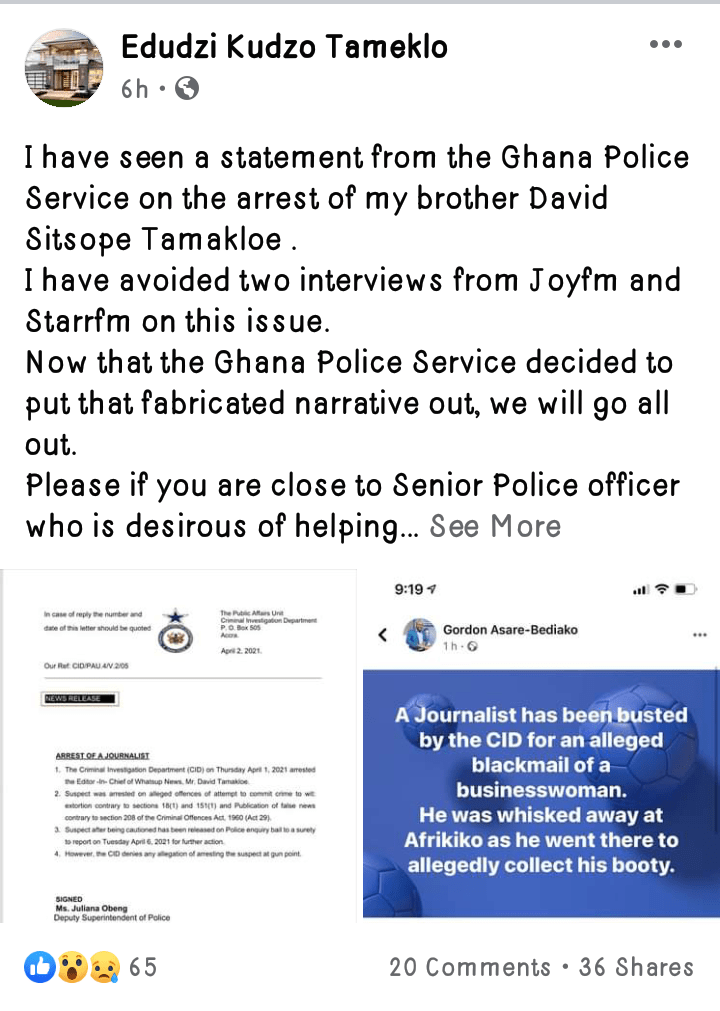