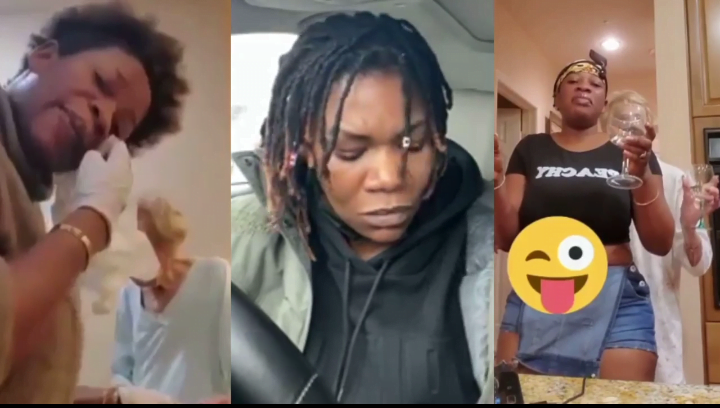 Ghanaian caretaker defends her employer’s acts of spitting on her after another of the two partying went viral.

Recall the viral video which captured the moment an old white lady was spitting on their domestic worker abroad (probably in America) triggering massive reactions from Africans on social media?

In the video which surfaced online, the old woman is seen asking the domestic worker to leave her house, calling her a thief, and threatening to call the police on her if she uses her car again. Another video shows the old woman spitting on her and subjecting her to bad treatments.

The black woman is a Ghanaian and in a new interview, she has given her version of the story and what truly transpired. According to her, the old woman is suffering from dementia and has been abusing her as a result of that.

She told the interviewer that she recorded the video to serve as evidence since the woman has rather been calling the police on her. Ultimately, the lady said the old woman meant no harm because of her condition (dementia) while revealing that the videos got leaked by malicious people after her phone got stolen.

She further explained that she has been working for the family of the old woman for five years but did those videos to keep as evidence since the white woman sometimes calls police on her for allegedly assaulting her.

Dementia is a general term for loss of memory, language, problem-solving, and other thinking abilities that are severe enough to interfere with daily life. Alzheimer’s is the most common cause of dementia. Subscribe to our e-newsletter to learn how you can help those affected by Alzheimer’s.

Related Topics:Old lady spits on caretaker
Up Next

Valentine Wahala: Man Turns Into A Lady To Catch A Boo.