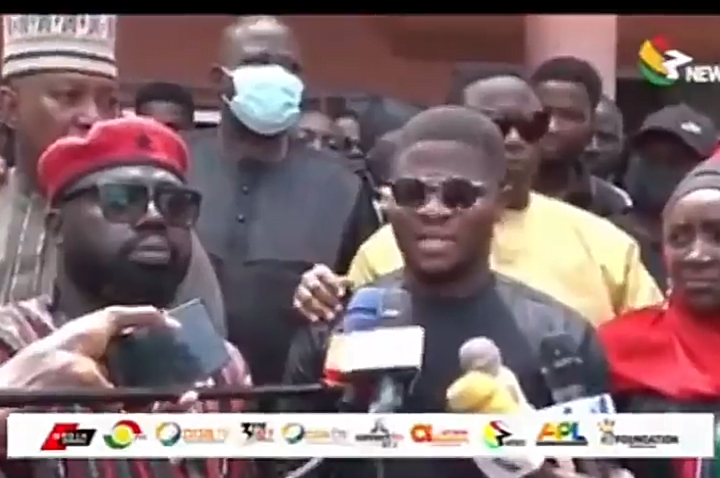 The National Democratic Congress ( NDC ), through its Youth Wing, has announced that the party’s scheduled demonstration and street protest dubbed, ‘A March for Justice’ will take place as planned.

his comes after the Police has told them that they cannot be provided with security during the demonstration.

The Police reminded the party that the restrictions imposed by the Executive Instrument (EI) 396 to contain the spread of the virus has not been lifted.

A statement by DCOP EA Sakyi, Deputy Regional Commander/AR said on Thursday July 1 that “The Accra Regional Police Command acknowledged receipt of your letter dated 30th June 2021 , on the above subject matter and wish to inform you that restrictions imposed by the Executive Instrument (EI) 396 to contain the spread the COVID-19 pandemic has still not been lifted.

But responding to the Police in a statement, National Yo0uth Organizer of the NDC George Opare Addo said In recent times, the Ghana Police Service has slept on its core responsibilities to the general citizenry “of our beloved country in such wanton disregard to its duty. The Ghana Police Service has metamorphosed into an agency of politics being used by the government for its partisan bidding. 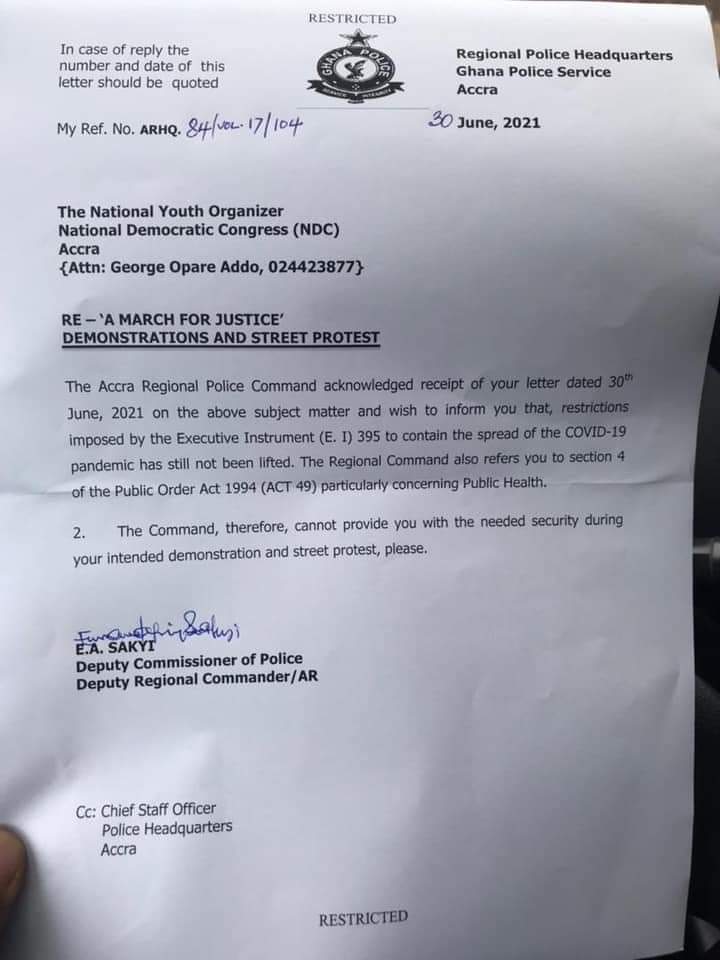 ”He added “In the wake of recent developments of insecurity, killing of innocent citizens by security forces and growing unemployment; causing young people to despair, the National Youth Wing of the NDC informed the Police of its scheduled demonstration and street protest in accordance with Section 1 the Public Order Act, 1994 (Act 491).

“The Police accordingly responded to our letter on June 30, 2021 in a letter with reference number 84/vol.17/104, and in a bizarre twist of events, informed us that the Police cannot provide security to protestors, and insufficiently referenced EI 395 and section 4 of Act 492, amongst others, as a smoke screen to impede the protest.

“The general public is hereby informed that section 4 of Act 491 specifically clothes the Minister of Interior with powers to impose curfew in the country, and so far as we are concerned, no part of Accra is under curfew for which reason demonstration cannot be held as the Police erroneously want us to believe.

“The weakest of all reasons cited by the Police was it’s reference to EI 395 in it’s letter. For the records, EI 395 was birthed on the strength of section 2 of the Imposition of Restrictions Act, 2020 (Act 1012) and gazetted on December 23, 2020. It is instructive to note that, section 4 of Act 1012 provides that “a restriction imposed under subsection (1) of section (2) shall be for a period of not more than three months”.

The statement added “If the Police Service was meticulous and not preoccupied with petty partisan politics, it would have known that EI 395 expired in March In effect, there is no law as EI 395 to be adhered to. We want to inform the general public who have received notice of the ‘A MARCH FOR JUSTICE’ street protest with enthusiasm and eagerness that, there is no law which gives the Ghana Police Service power to stop demonstrations or protests. In other words, the power to stop lawful demonstration does not rest with the Police.

“We have taken a decision to stand in for the several young people at the mercy of the injustices of this system; with lost hopes, no jobs, no opportunities and yet being killed and oppressed. Government must work for the generality of the people whose taxes finance the luxurious living and wishes of a select few in public service.”

Ejura Riots: John Mahama Directs Nana Addo On What To Do.