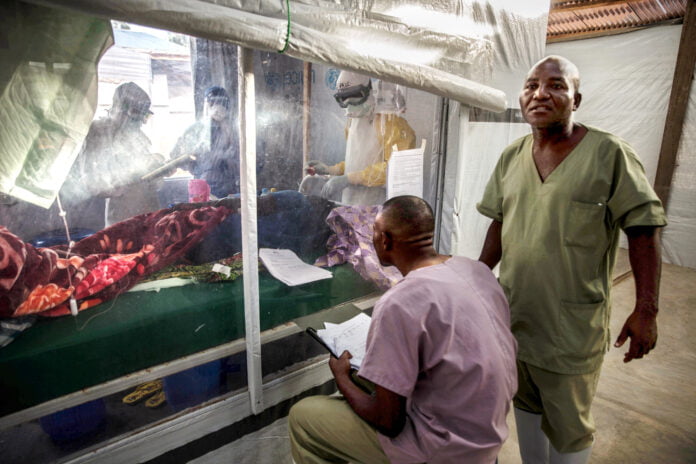 At least three people have died of Ebola in Guinea, with five others testing positive for the virus, health officials say.

They fell ill with diarrhoea, vomiting and bleeding after attending a burial.

But in response to that epidemic several vaccines were developed, which have since been used to fight outbreaks in the Democratic Republic of Congo.

It then spreads between humans by direct contact with infected blood, bodily fluids or organs, or indirectly through contact with contaminated environments.

Community funerals, where people help wash the body of the person who has died, can be a key way of spreading Ebola in the earlier stages of an outbreak.

The bodies of victims are particularly toxic. The incubation period can last from two days to three weeks.

Dr Sakoba Keita, head of Guinea’s national health agency, said more tests were being done to confirm the situation in the south-eastern region near the city of Nzérékoré, and health workers were working to trace and isolate cases.

The World Health Organization’s Africa director, Matshidiso Moeti, tweeted that the global health agency was “ramping up readiness and response efforts” given the potential resurgence of Ebola in Guinea.

An Ebola vaccine was first trialled over four months in 2015 in Guinea – started by the Public Health Agency of Canada and then developed by US pharmaceutical company Merck Sharp & Dohme (MSD).

Pregnant Woman Stabs Her Husband To Death For Questioning Her

Battered Children Recovered From A Patoress Who Owned Churches

Dubai Radar On Nigerians: Another Billionaire Picked After Displaying Stacks Of Cash