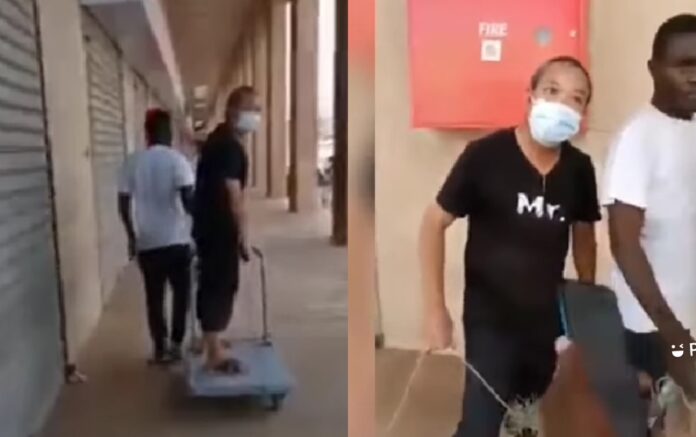 The authorities in Zambia say they are considering deporting a Chinese national after a video shared online showed him riding on a trolley being pulled by a local.

In the clip shared on Twitter the Chinese man is captured locking up his shop and then climbing on the trolley which one of his workers starts pulling.

He is then confronted by two people, one of them asks him: “Can you not walk?” They then force him to step down.

People commenting online have condemned the incident, with most saying it was demeaning and racist.

Ministry of Labour Permanent Secretary Chanda Kaziya said that the incident would be investigated and if the employer was found “wanting” he would be deported, local news site Daily Nation reports.

He added that the government would not tolerate mistreatment of Zambians by foreign business owners.

Lusaka Mayor Miles Sampa visited the shop over the weekend and said John Zulu, the man who was pulling the trolley, had been given a new job by his boss’ landlord.

“The good news on carousel saga is that the landlord of the Mall Lamasat Ltd have offered John Zulu a job with their main premises management office,” he said.

“He further indicated to possibly terminate the tenancy agreement with the tenant that exhibited racial abuse towards his black employee by getting pulled on a trolley for over six hours,” Mr Sampa posted on his Facebook page.

The Chinese man has not commented.

No Charge On Credit Transfers, Guilty Vendors Will Be Sanctioned – MTN

First Aids Treatments You Should Do For Gunshot Injury.

Listen: Caleb Kudah Denies His Identity As An Ewe To Save Himself From Brutality.

GES To Provide All Teachers With Laptops

You Can’t Lead The NPP As A Northerner

Another James Gardiner Letter: Many Shoulders For John Dumelo To Cry On.