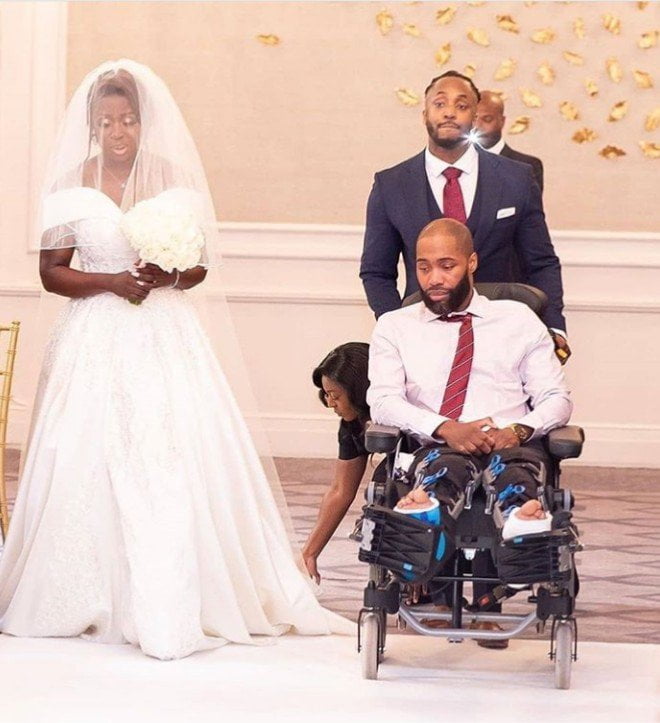 This is a story of two brothers , one promised the other to be there for him on his wedding day only to meet the most unexpected tragedy of life which left him with no legs but still has to be there for his brother as promised.

They used to live with no regrets nor sorrow, the elder brother promised the younger one that he will walk him down the walkway on his wedding day, unfortunately, the elder had a near-death accident that placed him wheelchairs but the pride sees it as perfect to have him on the walkway as he is.

On the 23rd June of this year, my brother got involved in a fatal car accident. He had to be cut out of the car and flown to the nearby hospital. He had broken both ankles in multiple places, broken right clavicle and elbow, fractured ribs, perforated bowel and perforated stomach.

Nobody saw this coming, l was broken and confused. The only option left is to give everything to God. The fact is my brother has been in the hospital for two days under nobody’s care. But God got him covered. God ensured that he has no brain injury no broken spine and he was successfully cut off the wrecked car on that day as a sole survivor.

In fact, his angels were on special duties that day.

Having critical medical conditions and difficulty walking, my brother thought he would spoil my perfect wedding picture, as discussed earlier in the year, perhaps someone should step in for him. But to me, this is a perfect picture in which God has fully sketched out his victory over things that almost break us.

God’s glory will be seen and revealed to believers and unbelievers.

Read also: Video: Things You Have To Know About Infinix S5

I Love My Husband More When He Is Not Having Money.

Video: Things You Have To Know About Infinix S5